In a previous post, I proposed “crowdsourcing a novel.”  Jake is thinking about writing a novel about a serial killer case that followed him from 1949 into 2015.  He’d write it, post the chapters as on ongoing series, give you all the chance to provide feedback, and then if it seems like a good idea, I’d obtain the help of an editor and a cover designer and self-publish it.  I’m pretty sure Jake wouldn’t mind if I kept the profits.  (Don’t tell him, just in case.)

Here’s a rough draft of the first chapter.  Is this worthy of being self-published or is it just a bunch of inside jokes that only this blog’s 3.5 readers would understand?

Be honest, be critical, let me know whether it’s worth it to keep going.

It was hot.  Hotter than the griddle at the Starlight Diner.  Hotter than the surface of the sun.  Hotter than Greta Garbo in the all together.  Hell, it was so hot you could fry an egg on the sidewalk and still have enough room for a stack of flapjacks and a side of hash browns.

I adjusted my collar and dabbed a handkerchief on my brow, catching the beads of sweat so like many reckless raindrops falling from the sky.

Suddenly, I felt a soft hand on my shoulder.  The scent of perfume wafted up my schnozola.  It was a welcome smell for a man who was hungry for affection and prepared to devour any sign of it that came his way.

I turned around to find myself staring at my coworker, Ms. Donnelly, attorney for my employer, Mr. Bookshelf Q. Battler.  She 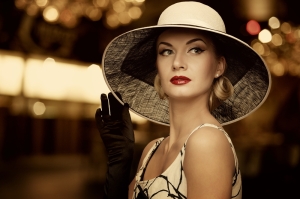 was dressed to the nines – a white, wide brimmed hat, a white dress with smatterings of black throughout and a pair of black gloves.

She made it look good but then again, she was the kind of dame that could look fetching in a potato sack.

“Are you all right?”  Delilah asked.  “You were monologuing.”

“I’m fine,”  I replied.  “Just something we detectives like to do from time to time.”

We craned our necks skyward and read the titles on the movie theater’s marquee:

Group of Super Heroes in Spandex Working Together

Reboot of a Movie that Came Out Two Years Ago

Chris Pratt “Aw Shucks” His Way Through Another One

“What shall we see?”  Delilah asked.

“I haven’t the foggiest,”  I replied.  “Don’t suppose they have a Bogie and Bacall reel they could put on for us do you?”

Delilah’s rare smile made a fleeting appearance.  For a man, there’s no better feeling than making a woman smile, especially when she’s working overtime in an attempt not to.

“Not sure I want to watch another fella mince around in tights while saving the day,”  I said.

“That’s understandable,”  Delilah said.  “And I must say I’ve neglected to see Fast Car Criminals Parts 1-74 so I’m certain I’d be irretrievably lost were I to take in Part 75.”

“What’s a reboot?”  I asked.  “Whatever it is, they have one of a movie that came out two years ago.”

“It’s not so much a sequel as it is Hollywood getting a do-over,”  Delilah explained.  “They’re sorry they fouled up their first attempt at bringing a beloved piece of popular culture to the silver screen and they’re asking the public to give them a second chance.”

“Well,”  I said.  “I’m a sucker when it comes to giving folks a second chance.  Where would we be without them?” 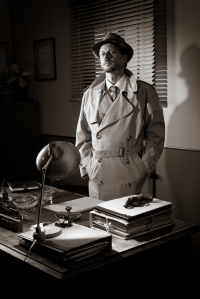 “Speak for yourself, Mr. Hatcher,”  Delilah said.  “I always do everything right the first time.”

Delilah’s face was as stoic as the Sphinx when she said that.  I couldn’t tell if she was joking or on the up and up.  It was always so hard to tell with that dame.  With her precise diction, she never fumbled a word and rarely allowed emotion to bubble over to the surface.

Of all the mysteries in my life I was itching to crack, she was the most beautiful one.

“Shall we see if Mr. Pratt can ‘Aw Shucks’ his way through another one?”

“I suppose we shall.”

I offered the lady my arm but she was taken aback by the gesture.

“Mr. Hatcher!”  Delilah said, clutching her pearls.  “Must I remind you that this is a mere social outing between work colleagues?  I’m not sure what delusions you’re harboring vis a vis the potential of amor but…”

God Sakes Alive.  I was aching for love from a gal who was locked up tighter than Fort Knox.

“You need not remind me, Ms. Donnelly,” I interrupted.  “Ma Hatcher taught me a gentleman must always offer his arm to a lady when walking next to one.  Why, you could stumble, fall, bruise your angelic visage and then I’d kick myself with the force of an angry mule over why I did nothing to prevent it.”

Another smile.  Two in one day.  It was a record.

“I see,”  Delilah said as she took my arm.  “Well, let it never be said I stood in the way of good manners.”

We strolled into the theater lobby and a cold air conditioning blast took us over, delivering us straight into Antarctica.  Hot one minute, cold the next.  It was a welcome feeling.

“It is,”  Delilah said.  “Perhaps you’d be more comfortable if you didn’t wear that trench coat everywhere?  It is August, after all.”

It was odd.  She made sense but then again, she didn’t.  Remove my beloved trench coat?  Ridiculous.  I only did that when I was back in the office.

We took a look at the refreshment stand menu:

Popcorn – An Arm and a Leg

“I’m trying my best to not sound like an old fuddy duddy, but in my day a fella could travel around the world for less than what these con artists are asking for a box of candy,” I said.

I was about to make an off handed comment about how Delilah was one sweet I’d like to partake in when a horrific scream pierced through the air.

It was coming from the ladies’ room across the lobby.

Heads turned and shocked faces were in abundance, but no one knew what to do.

Luckily, there was a man of action in the joint.

“Stay here,”  I said to a visibly shaken Delilah as I retrieved Betsy from her holster and made my way to the bathroom.

There was a sign that clearly marked the room as “LADIES ONLY” and Ma Hatcher had always taught me it was improper etiquette for a man to poke his head into such a place but given the circumstances, I’m sure this was an exception to the rule.

I kicked in the door, which in retrospect was unnecessary, seeing as how it wasn’t locked in the first place.  At least it made for good dramatic effect.

I walked in and there she was – a raven haired beauty in a pair of blue jeans and a pink shirt, covered in blood, her eyes displaying a sense of fear I’d seen too many times before.

I kneeled down and grabbed her hand.  She squeezed mine tightly and gasped for breath.

The woman choked and gasped for breath.

Even after all of the death and dismemberment I’ve seen in my day, mankind’s desire to fool itself into thinking things will be ok in the face of doom is uncanny to me.  The multiple stab wounds in this woman’s chest meant she had moments to live and all I could think to say to her was, “It’s going to be ok.”

It really wasn’t, but what else was I supposed to tell her?

She reached out a shaky hand and pointed to a small beep boop machine on the floor.  I wasn’t sure what it was but assumed it was a cell phone or something.  I grabbed it.

She winced through the pain and gritted her teeth, then struggled to take in some air.  Blood gurgled out of her mouth.

And with those last words, she died.  I’d seen more people die in the war than I could count.  I’d seen men and women die in the streets.  Some people grow used to it.  Me?  It tore my heart out every time.

Gently, I brushed my hand over the poor gal’s face, bringing her eyelids closed.  I always did that whenever I happened upon a a corpse at a crime scene.  I hated the idea of leaving a human being lying there with nothing to do but stare off into space for all eternity.

Poor thing.  Couldn’t have been more than twenty-one or twenty-two.  Yet another new life cut short by one of LA’s numerous psychopaths.

A slight breeze rolled over my face.  I looked up.  A small window was open.  I’d barged in while the girl was still screaming and I hadn’t see the killer.  He got away.  The idea to give chase crossed my mind but the degenerate had a head start and was probably half-way to Cucamonga.

Besides, I didn’t want to leave the victim alone.  I’d been the person on the floor with mortal wounds before.  I’d been luckier than this dame, but I wasn’t about to leave until the cops arrived.

I noticed the beep boop machine again.  The victim had seemed awfully concerned by it.

I picked it up and examined it.  The screen was dark but I could hear the faint sound of a woman singing coming through the tiny ear doo dads attached to the device.  “Earbuds” I believe they’re called but who can keep up with all this fancy technology?

I put the buds in my ears and was instantly shocked.  It was the kind of shock you feel when you look up to see a piano is about to fall on your head and there’s nothing you can do but stand there with your mouth wide open and and watch it happen.

All of a sudden I found myself listening to the first girlfriend I ever had belting out a tune:

In my body it grows.

It’s the life that I know.

You’re the one that I despise.

The man I wish that I never knew…

Don’t you know that it’s you?

I tapped my finger on the screen and there it was, a picture of Peaches LeMay.  What a knock-out.  She had the kind of body that could make a man lose his mind and a voice that could keep it lost forever.

Underneath her picture were the words, “JAZZ CLASSIC OF THE 1940’s – Peaches LeMay – Mr. Devil Man.”  It was her signature hit.  It started out slow before Peaches hit the high notes.  I’d seen her perform in person multiple times and the gal had a set of wind pipes that could fill a concert hall yet trick you into thinking you were the only one she was singing to.

The man I wish that I never knew!

If hating’s you wrong I don’t want to be right.

Get out of my way

Get out of my sight!

The memories poured into my mind like a waterfall hitting a pile of rocks.  And they weren’t just the good ones, like the time when Peaches and I made our way to Tinseltown together, a couple of kids with big dreams in our empty heads and little more than a few bucks in our pockets to back them up.

There were also the bad memories.  Specifically, it dawned on me that I’d investigated six separate crime scenes just like this

“Mr. Hatcher?”  Delilah asked from outside, afraid to come in.  “Is everything all right?”

“No,”  I said as I pulled the buds out of my ears.  “No Ms. Donnelly, I’m afraid things are very far from all right.”

Images courtesy of a shutterstock.com license.