A MEMO FROM THE DESK OF THE MIGHTY POTENTATE, EMPEROR OF PLANET NAME REDACTED 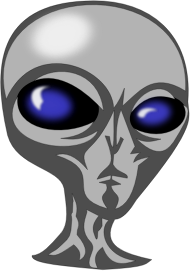 The Mighty Potentate, who bears a striking resemblance to Alien Jones.

Alien Jones, I grow tired of those smug, smarmy, incompetent human beings on Earth.  No cures for cancer.  No reversal of the aging process.  No world peace.  And yet?  Reality television aplenty.

These beings need to get their priorities straight.

Your mission?  Insert yourself as a Question and Answer Columnist on bookshelfbattle.com

Why choose a site with only 3.5 readers?

a)  This site is awesome.  It is in its infancy now but I predict that in time, it will be all the rage on Earth.

b)  Print media is deader than space disco.  On Earth, everyone and their Uncle Fred has a blog.  One is as good as another.  These people aren’t like us.  We just think something and everyone else knows the thought instantly.  And stop thinking about your government mandated life mate’s shapely ganderflazer, Alien Jones.  Your Mighty Potentate is trying to educate you here.

1)  Under no circumstances are you to provide the name and/or location of our home planet.  Humans may be a band of lazy, good-for-nothing slack-jawed dullards but if they ever figure out there’s another world full of sentient beings they can peddle their garbage reality television programs to, they’ll master space travel in two-weeks and I, the Mighty Potentate, will be furious if scripted television programming becomes a thing of the past on our planet, as it almost has on Earth.

Yes, we’ve tried to help Earth with this.  We beamed the ideas of shows like “Breaking Bad” into various Hollywood suits’ minds but I just cannot allow the Earthlings to find us, Alien Jones.  Know that if you violate this rule, you will be savagely beaten with your own ganderflazer and mocked throughout our society as an example of humiliation and great ridicule.

We will also call you a jerkface.

2)  Your column will invite humans to submit questions about anything and everything.  No question is too big or too small.  Questions can be as important as the origins of the universe or as insignificant as why do fast food employees always fakazilliak up your order.

3)  Through this weekly Q and A process, I believe humanity will, on the whole, become a more intelligent species.  They will become wiser and more capable of achieving great deeds.  Even better, they will abandon reality television and I, the Mighty Potentate, will no longer need fear the great offense caused to me by such tomfoolery.

4)  Humans require reminders about everything.  I have no idea how they even walk, talk, and breathe air on their own.  Each week, you will remind them to submit their questions in the comments on bookshelfbattle.com, to @bookshelfbattle on Twitter, or on the Bookshelf Battle Google Plus page.

5)  Bookshelf Q. Battler, a human we have identified as one of the most intelligent beings on Earth (and all that is saying really is that he’s the turd with the most polish on it) will forward questions posed by his 3.5 readers and you will reply with your answers in a weekly column, to be published on Sundays, the time of week when humans have the most time to waste on stupid things, such as viewing blogs with only 3.5 readers.

6)  Humans require bribery to do anything.  Seriously, they have a holiday called Christmas, which pertains to be the birth date of a magical, mystical holy man, and yet, they still need to have a guy called Santa Claus fly around with reindeer and deliver toys and presents and shit.  Pardon my language, I just get worked up whenever I am talking about the humans.

If the questions posed appear acceptable and come from reputable sources, you may choose to provide a plug in your column for the books, blogs, other projects these people are constantly trying to push on everyone.

I swear, I’m not sure there is anyone on Earth who isn’t trying to push a book.  My space craft crash landed in the backwoods of that planet one time and the drunk unshaven hillbilly who pulled me out of the wreckage tried to sell me a copy of his book entitled, “101 Drunk Unshaven Hillbilly Poems.”

7)  These writer types tend to be sensitive, perhaps a little bit more so when dealing with a blog operated by an anonymous blogger who claims to be the owner of a magical bookshelf.  Therefore, we’ll add a clause that if someone doesn’t like the plug you write in your column, they can request its removal and you’ll do it, no questions asked, no harm, no foul, no hard feelings and so on.

I, the Mighty Potentate, have finished explaining your mission, Alien Jones.  Go forth, do me proud, and bring me back a pepperoni calzone with extra peppers and olives.

10 thoughts on “Ask the Alien”