GET MY WRITING PROMPTS BOOK FOR FREE!

Get my Big Book of Badass Writing Prompts for FREE! TOTALLY FREE! No money down. Just get your free copy today FOR FREE!

My next installment of BQB’s Twisted Shorts is about an average schmuck who goes skydiving for the first time, only to find his primary and backup cords aren’t working.

With 5 minutes before he hits the pavement, he needs to figure out how to save himself, if he can. Also, foul play is suspected, so will he be able to figure out who sabotaged his parachute and why?

I think this is the best of the 5 covers. The other 5 were great but this, wow, I mean, if you’re browsing through a bookshelf and see this cover, you want to open it up and find out what happens to this guy, don’t you?

People Buying My Books on Purpose

What’s this mean? To me its a sign that someone read a free book, liked what they read, and were willing to part with some dough to read more.

Is it a lot? No. All comes down to like a buck or two. But its a sign of progress. Success in self-publishing really does seem to come down to putting out more content. Maybe next time I put out a free book, someone will buy 4 or 5 and so on.

Thus, I’ve been putting out my shorts – very quick short stories. They fluctuate between 10-20,000 words and I try to cap it off at 20. Most seem to be closer to 10,000. Easier to get out there, editing and formatting is easier and more affordable.

I do think ultimately I need to get some full length novels out there and they’ll come…eventually. Slow and steady wins the race as the turtle once famously proved.

Anyway, two of my books are FREE for the next day or two so grab your FREE copy. Thank you, 3.5 readers.

Get My Free Prompts!

I have 2 FREE BOOKS over the next few days. The first was the is he a werewolf or isn’t he story, Quarantine, and the second is my big book of badass writing prompts.

Get your free copy below. Get inspired and get your pen scribbling.

Get My Next Short!

Boy, 3.5 readers, my little Amazon catalog sure is growing.

My third short, “The End Is Nigh” is now available. Wacky conspiracy theorist and alleged nutball Harry Blanding shows up at a subway stop every day, ringing his bell while he blurts out his absurd claims.

Most believe him to be a performance artist with an absurd sense of humor, but when cell phone footage of Harry’s antics goes viral, one particular government agency that may or may not exist is not laughing.

Get your copy today:

The French philosopher Albert Camus once said, “In the depth of winter, I finally learned there lay within me an invincible summer.”

What do you think that means, 3.5 readers?

I’m going to guess it means that even during Camus’ worse times, he was able to feel good about himself. And why not? He was a famous writer who was handsome and popular with the ladies.  It was easy for him to find his invincible summer.

Camus was an absurdist and I am no philosophy expert but my understanding is that absurdism is a spinoff of nihilism.  Nihilism = life is meaningless while absurdism = life is absurd.

Is it? Maybe. It is kind of absurd that you are born, you live, you learn all these lessons and savor the joys of life in your youth then eventually you hit a point where with each passing year, these joys are taken away from you more and more.

So maybe it wasn’t easy for someone who thought life was absurd to find an invincible summer inside of himself. Maybe Camus does deserve a pat on the back for finding it.

Sidenote – the poor guy died at 46 in a car crash while a passenger in a sports car his agent was driving. There was a train ticket in his pocket that went unused because he decided to drive with his agent instead. If you get an agent, don’t let them drive, 3.5 readers.

Then again, what do I know? Maybe your agent is a great driver and the train you would have been a passenger on might have exploded due to some sort of unforeseen malfunction.

Don’t listen to me. Don’t take advice from blogs that are only read by 3.5 readers.

To sum up, it is good that a famous writer finds his invincible summer. It makes sense. Where it is harder is the janitor who scrubs toilets all day then comes home to an empty house because his wife left him and so he stares at the walls by himself all night. These are people who need to find their invincible summer, and it is hard.

Come to think of it, it is hard for proprietors of blogs with only 3.5 readers to find their own invincible summers. Excuse me. I need a kleenex to dry some tears that came only due to allergy season.

Find your own invincible summer, 3.5 readers and if you know someone living in winter, maybe see what you can do to bring some summer into their lives.

I got through this whole post without making any French jokes about Camus probably liking baguettes and crepes suzette. I am proud of myself, oui, oui, sacre bleu!

GET MY FREE BOOK

It’s free. You’ll be supporting your old pal BQB by picking up a free copy. Thank you.

The One That Got Away – Rising Up the Charts

My FREE promotion for The One That Got Away is ongoing until August 10.

Check out these stats:

It’s currently #94 in Single Authors Short Stories and #51 in Dystopian Science Fiction (Note these stats are for books that are free in these genres. I’m not number 1 in paid dystopian sci fi. That’s George Orwell. Look out, George. Big Brother and I are comin’ at ya.

Anyway, if you could grab your free copy so it keeps climbing the charts, I’d appreciate. A review would help even more.

It’s basically a case of be careful what you wish for. Evan Brooks spends twenty years on a bar stool, drinking and complaining about Lisa, the fiance who broke up with him. A mysterious stranger gives him a trial run of a version of the world where Lisa stayed.

Unfortunately, Lisa and Evan married…and their son grew up to become the most ruthless dictator the world has ever seen.

Ever feel bad when something didn’t go your way? Maybe…don’t…because the world has a funny way of making the right things happen and when people try to push back against the unseen hand of fate, the results are rarely good.

It’s not too late to get my Free Shorts!

Have you gotten your hands on my free shorts yet? No? Why not? What, are you too good for my shorts? You think there are better shorts to be had out there? What, are you made of money? Do you prefer shorts that are not free?

Sorry for the guilt trip. Anyway, my BQB’s Twisted Shorts series has begun with “When Superheroes Quit” and you can still get a free copy on Amazon tonight and all the way through tomorrow night.

You want to wait to Sunday? Don’t do it. If you wait till Sunday, my shorts will no longer be free. You’ll be kicking yourself in your shorts over losing out on this great opportunity to get my free shorts.

In conclusion, please get your free copy of my shorts:

So, I’m getting into the short story game.

Why, you didn’t ask?

I’m working on an anthology series. Short stories with twisted endings, like an homage to the Twilight Zone, but with BQB’s sense of humor.

In the first one, a superhero quits. That’s right. One day, he just decides he doesn’t want to save the city anymore. It’s a thankless job and there are more productive things he can be doing, so he decides to move to California to work on becoming a pop star.

Here is the Righteous Champion, singing on his Karaoke Machine in the living room of his condo instead of saving Horrendous City from the Precursor, a vile, alien altered being who has constructed a ray gun that can erase anything. 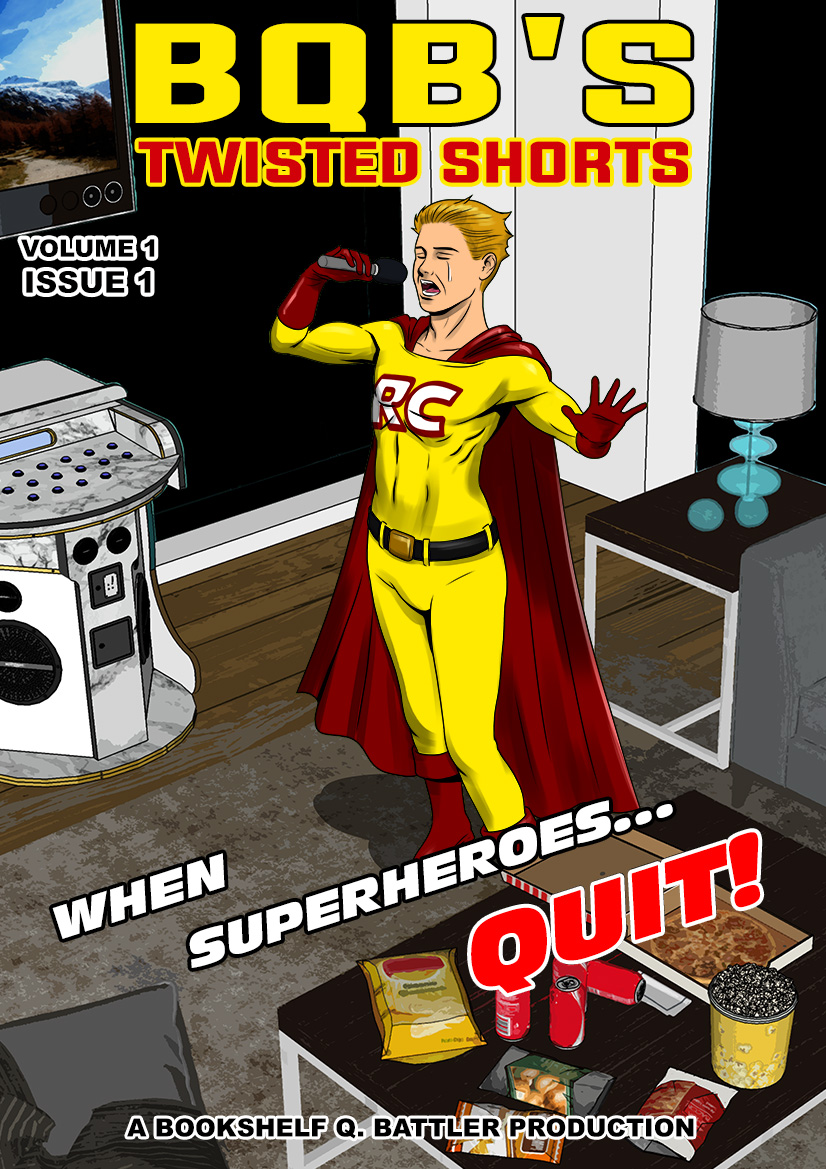 Once they learn that the city’s savior is flying to greener pastures, Mayor Lazarus Latherton and Police Chief Isaac Hammer are faced with a terrible fate.  They will have to do…their jobs!

Ultimately, I’ve been trying to make a go of self-publishing for awhile now and time, money, etc. are all tough factors.  My thought here is this:

Say you want to get into the lemonade business.

Would you a) make one pitcher of lemonade and start a stand in your yard and if that becomes profitable, you might, say, start a couple more stands, eventually working your way up to starting a lemonade store, followed by a lemonade chain or…

b) Start a lemonade chain first?

I was trying to do b all along and now I’m realizing a will, I think be better.

Honestly, it could be better to just say screw it all and eat cookies and watch TV.

But alas, that old writing bug is still biting me, so let’s see how this goes.

Any thoughts on the cover? Let me know.