Leave a comment
Things That Really Frost My Ass

Uncle Hardass is on a roll and can’t be stopped.  Here are his latest complaints:

When I was young, people called you for three reasons: a) to tell you someone had died, b) to tell you they were about to die or c) to tell you that you had a disease that was going to cause you to die.  Even then, the deaths needed to be imminent, within a day at least, or else the caller was considered extremely rude.

Now everyone has a phone and they get calls all the time.  Most of these calls are total BS.  “Oh yakitty yak yak I want to yak to my friend all day long.”  Bah, friends.  Who needs ’em?  Not this guy.

Even worse, bosses have no problem calling their employees at midnight to give them a list of demands.  Hell, I just got a call from my boss to remind me to dig extra salt out of the salt mines tomorrow.  You know who will never call you on your cell phone?  Your boss….because you don’t have one.  Get a job, you disgusting hippie.

Let me be clear:  I’m not complaining about the Amish themselves.  They have a fine organization.  I applaud them and frankly, I don’t think people appreciate their work ethic.  I myself get up before dawn everyday and churn butter, milk cows, build furniture and raise at least ten barns, all by myself and all before breakfast.  My only complaint is that they won’t allow me to join them because they say I swear too much.  Bunch of  bullshit if you ask me.

I’d like to start my own Amish spinoff community except instead of stopping progress in the 1800s, I’d stop it right around 1950.  Ahh, the good old days when men where men and could come home from a long day at the salt mines, pop open a beer, and watch TV while the little woman cooks dinner.  Nowadays if you ask a woman to make you a sandwich it’s considered a hate crime and they try to lock you up like you’re Hannibal Lecter.

Gyms are completely unnatural.  A long time ago, before cars and other modern conveniences, people just did a lot of shit.  They built their own houses, grew their own crops, raised, strangled, and butchered their own chickens.  If you needed to go anywhere, you had to walk up hill both ways.  In short, you had to do a lot of shit.  Even shitting was hard work.  If you were a rich socialite, you had to walk to your fancy outhouse.  If you were one of the common folk, you had to walk into the middle of the forest, wrestle a grizzly bear with your bare hands, then shit, then bury your shit so the smell would not attract more bears.  Bears like the smell of shit.  Don’t ask me why.  Who do I look like, Jungle Jack Hanna or some shit?

People don’t do shit anymore, so now they head to these gyms, pay a big fee to be there, then run around on treadmills like a bunch of stupid hamsters on wheels in their cages.  If only they knew they could just do more shit, then they’d be able to burn more calories for free, just by doing the shit that needs to be done, because no one else wants to do that shit.

Dog or cat.  Cat or dog.  These are the only two forms of acceptable house pets.  You can’t pet a fish or a snake, and if you have a gerbil or a ferret, you might as well just turn your humble abode into a rodent flophouse.  Also, to put a bird capable of flight in a cage is a sin that makes Baby Jesus cry, you bunch of heathens.  Stop bringing home weird pets.  It does not make you interesting.  It just makes you weird.

These people need to go straight to hell and be poked by a pitchfork wielding, pointy eared demon for all eternity.  There’s nothing worse than waking up in the morning, opening up the kitchen cupboard and assuming that I’m in for a big treat in the form of a heaping bowl of Raisin Bran only to find that some waste of space has already eaten it all.  Even worse, this disgrace to humanity has left the empty box there for me to throw away, instead of just throwing it away on his or her own.  Maybe I would have picked up some more Raisin Bran at the old person cereal store had I known that the box was empty bu t I assumed it was full because I am a good natured, trusting person and I did not realize that I was living with a monstrous abomination who would eat all the Raisin Bran, then leave the empty box in the cupboard.

Did you know Hitler used to do that shit?  Goebbels would regular go to the cupboard in Hitler’s bunker in the hopes of pouring himself a nice big bowl of Nazi Flakes, only to discover that Hitler had put a box of empty Nazi Flakes back on the shelf.  If you put empty boxes back on the shelf, you are literally worse than Hitler. 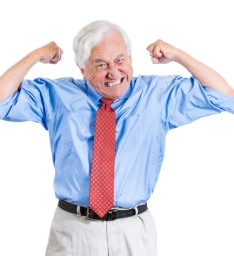 I see none of you have taken my advice to give up on all this writing horse shit and get a job at the salt mines yet.

Salt Mines Inc. is waiting there, ready to pay you good money for every chunk of salt you pull out of the ground but are you clowns interested?

“Look at me!  I’m a blogger!  I’m super smart and special and the whole entire world needs to know!”

Wait, wait.  Come back.  Don’t leave yet.  I have to bitch about Thanksgiving first and then you can go.

This is a holiday about “giving thanks” but if you people have been paying any attention (and why would you because this blog sucks with the gale force wind of a thousand Dysons) then you know I don’t give any thanks whatsoever for anything.  EVER!

So instead, I’m going to rename this holiday, “Complaintsgiving.”  Here are my complaints about this bogus excuse for a holiday which, lets face it, was invented by no good lazy as hell hippies just to get out of a day of work.

In fact, it has been the hippies’ goal for as long as I can remember to declare every single day on the calendar to be a holiday so that no one has to work anymore.

That’s fine.  I know that’s the way this socialist nation is headed.

One day I’ll be the last asshole doing any work at all and the government will just tax me at a rate of 10 bazillion percent.  I’ll take on the entire country’s debt myself so the rest of you losers can have a jolly good old time on my back.  It’s ok.  By no means feel bad about yourselves.  I’m just an old man committing micro aggressions against your safe space.

But I digress.  My complaints:

“Oh!  Hello!  I’m an idiot and I think it might be a good idea to shove a shit ton of bread crumbs up a dead game bird’s ass, cook the whole shebang, then dig it all out and serve dead bird ass bacteria covered bread crumbs to my guests!”

WHAT THEY REALLY MEAN:  I wanted so badly to play for the NFL when I was 17 but no college would draft me because I ran around like I had a sack of doody in my pants so now the only joy I get out of life is pretending like my cheering for the group of mercenaries hired to play on my geographic location’s behalf is actually accomplishing something.

Finally, I’d like to end this column by sharing the one thing I can’t stand above all else when it comes to Thanksgiving:

Uncle Hardass is BQB’s Late Uncle.  Although he passed on many years ago due to a pastrami induced heart explosion, he still haunts BQB HQ in ghost form, informing our noble blog host about everything he does wrong in excruciating detail.