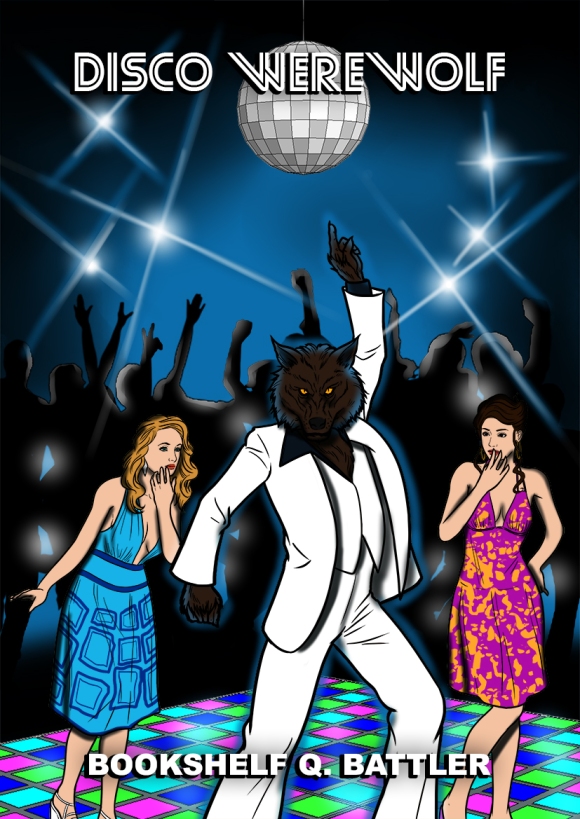 Ernie Pomeroy sat behind his desk in a tight, cramped corner office just outside the hustle and bustle of the newsroom of the New York Courant.  The city desk editor had given up on keeping up appearances long ago.  His hair was done up in a bad combover.  His shirt bore the brunt of a number of lunch stains and there were some prominent crumbs in his mustache.

Although Claudette was grossed out by all of this, her focus was on selling her photo, which Ernie was studying as if it were a snip straight out of the Zapruder film.  “There he is.  Disco Werewolf in the flesh.”

Ernie studied the shot with a magnifying glass.  “It’s not really the flesh though, is it?  What’s this guy wearing?  Felt?  I hope this isn’t real fur.  That’s cruel.”

“A real fraud,” Pomeroy said.  “Which is an oxymoron if I’ve ever heard one.”

Claudette sat down in the visitor’s chair across from Ernie’s desk.  “Sir, I’ve seen things…”

Ernie set the photo down on his desk and sat back.  “Yes, Miss Jenkins.  I know.  You’ve told me.  You’ve quote unquote ‘seen things.’  Trolls who live under bridges and ask riddles.  Ogres who live in sewers and are obsessed with their odors.  Goblins who live in our heating ducts.  Vampires and werewolves, witches and warlocks who walk among us, holding themselves out as human.”

“There are all kinds of writers, Miss Jenkins,” Ernie said.  “If fiction’s your bag, I suggest you write a novel and query it throughout the publishing industry.  Cross your fingers and hope to get an agent.  But here at The Courant, we deal in facts, not fiction.  Truth, not make-believe.”

“The first rule of journalism is if you can’t back it up, then you can’t print it,” Ernie said as he held up the photo.  “Prove to me this is a real werewolf.”

Claudette thought about the question.  She considered a number of possible responses, realized that Ernie would have most likely rejected each one, so ultimately, she just sat there and awaited the incoming lecture.

“If you can’t see it with your own eyes…”

“Miss Jenkins,” Ernie said.  “I’ve been a newsman for a long time.  A long time.  Longer than you’ve been alive.  I check, double-check, and triple-check everything before I believe it, and quadruple check everything before I even dare to print it.  When my own mother tells me she loves me, I ask dear old dad if she’s full of it or on the level.  What proof can you offer me to make me, and more importantly, this paper’s readers believe that this is legit?”

“Yes,” Ernie said.  “And whoever this Disco Werewolf really is, there’s no doubt he’s a master of special effects.  Have you seen the pictures these days?  Some amazing things they’re doing that’ll take your breath away.  For all I know, this could be some kind of performance art designed to sell the next big Hollywood horror film.”

Claudette shook her head.  She knew it was no use to try to plead her case further.

“Look, kid,” Ernie said.  “You’ve got moxie.  You want this.  You’re hungry.  I know what that’s like.  Feels like it was ages ago but I remember when I was trying to break into this business and couldn’t get my foot in the door.  You’ve got heart but you’re young.  Green around the gills.  Go to college.  Have a blast.  Pound on some bongos with some hippies and smoke some reefer sticks and do whatever the hell college kids do these days.  Write for the student paper.  Build a clip file.  Get some honest to god news training and you’ll find out just how hard this job really is.  Just remember that no one starts out in the penthouse of this game.  Everyone’s got to start up the basement steps and climb their way up to the top, step by step.  It isn’t for everyone and if you get a taste of this world and don’t like it, there’s always other things you can do.  And if you do like it, my door’s open to talk job opportunities.”

The young woman closed her eyes, took a deep breath, then opened them.  “Sir, this is too important to wait.  I’m covering stories, right here, right now the likes of which the world has never seen before.”

Ernie smirked.  He reached into his desk drawer and pulled out a stack of old papers.  “Oh, the world’s seen them before, alright.”

The city desk editor held up a paper titled International Conspiracy Tattler!  Underneath the headline was the publications tagline: We Speak Truth to Power.  On the front page, there was a picture of Elvis, but with a pair of sharp fangs popping out of his mouth.

Ernie read the headline out loud.  “Elvis Lives!  How the King of Rock and Roll Faked His Death on the Toilet and Ran to Barbados.”

“At age 42, Elvis Presley, better known to the supernatural underworld as Gorak the Unholy, knew the jig was up.  It would only be a matter of time before he would be exposed as the vampire that he was and the idea of seeing all his fans burn his albums and demand that he be staked through the heart was too much for him to bear.  Sure, he had taken to stuffing his clothes with cotton to give the appearance of weight gain, while make-up artists toiled day and night to add wrinkles and other signs of age.  However, despite his best efforts to hide his terrible secret, he knew it wouldn’t be long before Graceland would be surrounded by hordes of angry people brandishing torches and pitchforks, just as how his time spent at so many castles in the past had ended.  According to our sources, Presley paid off authorities to aid him in faking his own death so that he could run to the Caribbean and begin a new life as a fishing boat captain.”

“Get a load of this garbage,” Ernie said just before he read the tabloid’s prose.  “We all thought that the California governor’s meteoric rise through the ranks of the Republican party was due to his own brand of down to earth, folksy wisdom with a pinch of Hollywood star power.  However, after a thorough investigation, we have determined that the Gipper slashed his way to the top from behind the scenes, thanks to some help from his trusty wolf claws.  That’s right, folks.  If there’s one thing Governor Reagan hates, its unwashed hippies.  If there’s two things he hates, it’s unwashed hippies and a silver bullet.”

Ernie picked up another edition of The Tattler.  It featured a photo of a beautiful woman wearing an elegant gown.  In the next photo, the same woman’s face had been replaced with that of an other worldly being.  It had three bug eyes and sharp teeth.

“This one’s my favorite,” he said before as he pointed to the title.  “Extraterrsexuals!  How Our Planet Has Been Secretly Invaded By Hungry Hookers From Outer Space!”

Ernie read away.  “New York’s discerning gentlemen will have to be a little more discerning.  As it turns out, Meelothorps form Krobash 12 have infiltrated our world, currently posing as ladies of the evening.  They may say that they’re hungry for a man’s cash and company, but what they’re really looking to devour is something else entirely.”

The city desk editor grabbed the tabloids and shoved them back in his desk drawer.  “Ah, I get a kick out of those.  They sell them at a newsstand I walk by everyday on the way to work and everyday I say I’m not going to waste my money on this garbage but I can’t help it.  They’re hysterical.”

Claudette did not appear amused.

“There are all kinds of writers, Miss Jenkins,” Ernie said.  “If you want to write tabloid schlock, more power to you.  There’s a market for it and it takes a certain kind of talent, I’ll admit.  But if you aspire to work at this paper, you’re going to have to bring the goods.”

Claudette nodded.  She had no further interest in arguing.  She grabbed her back-pack and was about to head for the door when Ernie stopped her with an offer.  “Twenty bucks”

“…a moron who likes to bounce around in a Halloween costume.  And that’s what the caption will read.  Something like, ‘Costumed Buffoon Wins Over Crowd at Discotheque.’”

“And a byline?”  Claudette asked.

Ernie scoffed.  “Please.  If I give a byline to a tyke barely out of romper room, my seasoned reporters will burn me at the stake.”

Claudette stood there, wondering to herself if she had chosen the right profession.

“Take it or leave it,” Ernie said as he looked at his watch.  “One of my people called in sick so I’ve got a hole to fill on page D-23.  This will work if we get it out in, oh, about five minutes.”

Ernie scribbled onto something down onto a slip of paper, then handed it to Claudette.  “Take this to the receptionist out front.  She’ll cut you a check.”

Claudette took the paper and headed for the door.  Ernie stopped her again.  “Miss Jenkins, a thank you would be nice.  Not many high school students get their work published in a national newspaper and frankly, I should throw this photo in the trash.  I don’t know what’s going on with this spot of light but the boys will have their work cut out for them to crop that out of the photo.  Do check your flash next time.”