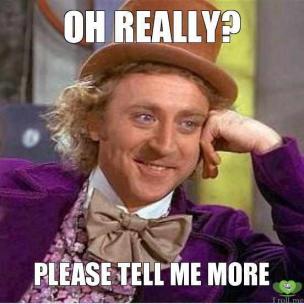 A sad day in the comedy world, 3.5 readers, as actor/comedian Gene Wilder has passed away at age 83.

He had a long resume of hits but the ones that stand out to me are Young Frankenstein, Blazing Saddles, Charlie and the Chocolate Factory, The Producers and two films where he paired up with comedian Richard Pryor in the 1980s – Stir Crazy and See No Evil, Hear No Evil.

I could go on all day long about all of these films.  In fact, the press has done a great job of that.

So instead I’ll expand a bit on See No Evil, Hear No Evil.  This was a 1989 comedy in which Pryor played a blind man named Wally and Wilder played a deaf man named Dave.

Together, they witness a murder.  Wally hears it.  Dave sees it.  A mixup leads the cops to think they did it, so they go on the run as a team with Dave being the eyes and Wally being the ears.

I remember seeing this as a kid and laughing a lot.

COP: Was there or wasn’t there a woman?

WILDER AS DAVE, BECAUSE HE’S DEAF: Fuzzy wuzzy was a woman?

What was your favorite Gene Wilder moment, 3.5 readers?