How to Self-Publish an eBook on Amazon

Reblogging this post by Shannon Meyerkort, who gives a pretty detailed and helpful discussion of how to get a self-published book onto Amazon.

You may be familiar with my story about a post I wrote a few years ago: The Brutal Truth About the Third Child. It has been republished on a number of other sites, much bigger than my own, and as such – has always done a lot better for them, than it ever did for me.

Recently, I wanted to see if I could cash in on my own success, so I decided to turn The Brutal Truth, and a number of other posts about The Third Child, into a book which I self-published on Amazon.

The process was amazingly simple, and I am sharing it here – partly so I can remember it next time – but also for anyone who is considering self-publishing a book.

This is a really basic guide, and I do not pretend to be an expert. My book was text heavy with hardly…

BQB here with some thoughts on the Suicide Squad trailer:

The official story is this trailer was only intended for Comic Con but DC decided to release it because nerds had pirated it and distributed it so they figured they might as well put out a quality version.

If you’re a nerd who isn’t in the know, the Suicide Squad is basically DC’s version of Dirty Dozen.

Based on a DC comic series of the same name, the government forces/recruits the DC villains (mostly Batman’s enemies) to use their evil powers for good, sending them on high-risk, practically suicidal missions.

Overall, the footage looks great and Jared Leto, in my opinion, looks like he’s going to be a better Joker than I’d originally given him credit for.

Like most geeks, I’m a big Harley Quinn fan.  If you’re not a nerd, Harley is the Joker’s girlfriend who got her start in the 1990’s Batman: The Animated Series.

Why do we love Harley?  Because she’s so hilariously over the top.  Now, I get that when there’s an attempt to make a serious movie, she can’t be running around in a full harlequin outfit with a massive novelty hammer to bonk people over the head with but come on, at least do the “Harley” voice.

Judging by this footage, they movie’s going with a half-powered Harley.  Harley at 50%.  She’s sort of got the voice a little, she’s a bit out there, but she’s not bouncing off the walls.

All I can say is if she doesn’t say “Hiya Puddin!” or call the Joker “Mr. J,” there’s going to be a nerd revolt.

DC’s definitely trying to pull a Marvel.  Dawn of Justice and Suicide Squad both come out next year and assumably it will all lead up to the Justice League giving evildoers what for.

Myron and I were buried in a divot of crunched steal.  When I hit the roof of a parked tax cab with my back, the whole enchilada just wrapped around us like blanket.

The jump was a risky move, but one that paid off. 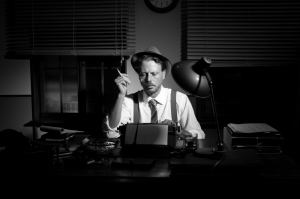 My new sidekick was hugging me tighter than a high school senior trying to cop a feel off his prom date on the dance floor.

We jumped out of the wreckage and a number of looky-lous watched us with our tongues hanging out.  I’m not sure what attracted their attention more, the fact that I was walking away from a twelve story fall or the fact that I was waltzing down the street, a shotgun in one hand, a captive’s arm in the other, while a pair of gangsters took pot shots at us from the window.

“My car,”  Myron said as he pointed to the tiniest piece of crap I’d ever seen.  An electronic automobile.  Little, beige, and looked like it could fit a thousand clowns.

But that day, it only had two.

“This is a car?”  I asked as I forced myself into the passenger seat.

Sometimes I wondered why I bothered speaking to anyone.  I only understood half of what anyone had to say to me.

“Why do you want to know?”  Myron asked as he sped down the street.  “Why’d you lie to Fernando?  I never cheated anyone named Frank.”

“Your buddy pumped my buddy full of lead.  I want to know why.”

“I’m sorry,”  he said.  “Diego called Craig.  Told him he was going to give have us disemboweled and beaten with our own entrails.”

“I told him there was no way you could rob enough stores to come up with ten grand in time Diego would probably just take the money and kill us anyway.”

A barrage of bullets streaked across the compact car’s backside.

I looked in the rear view mirror.  Fernando and Brujo were gaining on us in a pick-up truck.

“Get the lead out junior.”

I tapped on the window in the roof.

Myron hit a switch and the glass retracted.  I popped out of the roof, pointed Wanda at the truck, and filled it full of buckshot.

The truck swerved and sideswiped a whole line of parked cars.

I reloaded Wanda, popped out of the roof hatch, and gave the gangsters another helping, this time directing it at one of their front tires.

The truck swerved out and flipped over.  It was a magnificent wreck.

We drove a little longer then I told Myron to stop the car.  He pulled over in front of a donut shop.

I pulled out a pair of cuffs, slapping one bracelet around Myron’s wrist and the other around the steering wheel.

Then I grabbed the keys out of the ignition and threw them out the window.

“MAN, WHAT THE EXPLETIVE DELETED?”

“Tell me where Craig is.”

BQB EDITORIAL NOTE:  You get the picture.

“Fine,”  Myron said.  “Sometimes he holes up with his girl, Karen.  She’s a stripper at the Cotton Candy Alligator.   That’s all I know.”

I reached into Myron’s pants pocket, grabbed it, and dialed 9-1-1.  Who says you can’t teach an old dog new tricks?

“Uh, yes, hello doll face?  Are you the gal I talked to before?”

“To what call are you referring sir?”

“What are you doing?”  Myron asked.

“Never mind,”  I said to the operator.  “Listen, sweetheart, I need you to report to the coppers that there’s a fella by the name of Myron locked up nice and tight in a real shit box of a car outside Delroy’s Donuts just off of Hollywood Boulevard.”

“I’m sure the officers can find it.”

“Well it’s a donut shop, darling, I’m sure they can, oh and hey listen hon, tell them this twerp’s running some kind of scam out of his apartment.  Bagging up baby powder and selling it to criminals and so forth.”

I thought about it.

“Sinatra,”  I said.  “Frank Sinatra.  If you’ll excuse me ma’am, Dino and I have to talk to a couple of showgirls.”

I hanged up and tossed Myron’s phone out the window.

“Fernando was right,”  I said.  “You are a dumb ass.  You may not have conned One-eyed Frank but I saw your operation back there.  How many scumbags were you going to try to pass off baby powder to?”

“So what?”  Myron said.  “Who cares if a bunch of gang bangers get robbed?”

“Normally I wouldn’t,”  I said.  “But since an innocent man was caught in the crossfire, now I do.  See you on the flip side, Myron.”

I got out of the car and strolled down the street.

It was time to head on over to the strip club.  Oh, the things I do in the name of justice.

Image courtesy of a shutterstock.com license.