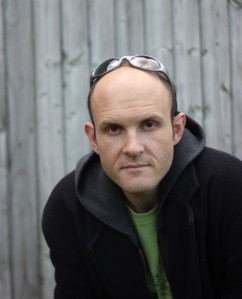 FIND THIS ZOMBIE AUTHOR ON:

Today’s zombie author is Michael Cairns, the scribe behind the series, Thirteen Roses, an epic tale that begins with a flower seller who’s forced to save the day in the face of a zombie apocalypse.

Here on the Bookshelf Battle Blog, I like to talk to people about their own personal battles.  Currently, Michael’s winning the battle when it comes to making a name for himself in the writing game, but analysts say the struggle to retain his hair might be lost.

Q.  Michael, I’m stuck in a rather stressful situation.  I’m in the middle of a zombie apocalypse that’s struck my hometown.  As if that’s not enough, a maniacal alien despot who hates reality television has threatened to conquer Earth if I die before writing a novel that’s so good, it inspires the masses to abandon any and all interest in shows in which vapid, mindless, quasi-celebrities are followed around by cameras all day.  On top of that, a corrupt general is trying to blow me up because I allowed one of my correspondents to write about a top secret mission dating back to World War II on my blog.

But this interview isn’t about me, it’s about you, and I don’t want to bore you with my personal problems.  Suffice it to say, all this stress made me think about your situation.  This year began with you making a pledge to your fans that you’d write fifteen books in 2015.  Further, you promised to submit a daily video log chronicling your efforts.

We’re on the tail end of 2015.  How has the challenge gone, what inspired you to do this in the first place and how have you dealt with the ensuing stress?

A.  Hi Bookshelf. First, can I say how sorry I am to hear about your terrible situation? That sounds like pretty dire straits to me. If you’ll forgive a little advice, I’d urge you to keep eating your greens to keep your strength up, and never leave home without at least two chainsaws about your person at all times.

With regards to your question, it’s been a pretty crazy year.  Just to clarify, the challenge was to publish 15 books.  My inspiration for this was that I wrote 15 books in 2014. I then sat down with another indie-published friend of mine who threatened to kick my arse unless I actually did something with them. So, the challenge was born. To keep things interesting, I also opted to write a million words, publish a short story on my blog every week and vlog my journey every day. The challenge has, so far, gone remarkably well. I’ve published 6 books and have another three less than a month away. So the last few months of 2015 are going to be pretty packed, but it’s still doable, assuming I’m willing to completely lose what remains of my sanity.

Regarding the rest of the challenge, that I’ll easily do. I’m going to hit a million words sometime around the beginning of October, and my short stories are, fortunately, getting better each week.

As far as stress goes, it’s been a mix. I’ve given up shaving, given my chocolate addiction free reign, and taken to shouting at myself on long car journeys…okay, maybe not so much of the last one. It has been stressful, though mostly in a fun way. I have two young children at home and also decided to move house in July, so that’s only added to the fun…

Q.  I whine louder than a balloon with air escaping out of it about how I can never find the time to write, but here you are living the dream.  Do you have any advice for my 3.5 readers about how to balance writing with all of the other curveballs that life throws our way?

A.  Excellent question. I think the answer to that lies in a couple of things. The first is to examine yourself and your habits, and decide how organized you are. If you are someone who does things in a random, scatty kind of way, it can be tricky to develop the discipline to write on a regular basis. Tricky, but by no means impossible. I wrote a guest blog post on how to develop said habit, which you can check out here.

The second thing is to decide how important writing is to you. I know that seems kind of obvious, but it’s easy to say how much it matters. The question is, is it important to ditch reruns of The Walking Dead? Is it important enough to wake up an hour earlier each morning? Simple things that will develop your writing habit.

I can highly recommend Julie’s website that tracks her first year in the self-publishing business. She’s a romance writer, so if you’re struggling to find the light at the end of your apocalypse shaped tunnel, Bookshelf, it might just help brighten your day. 🙂

Q.  How has daily video logging worked out for you?  Is that a means of author/fan communication that you’d recommend for aspiring writers?

A.   I have to be honest about this, it’s been hard work. I’ve got the process, from recording the vlog to having it uploaded onto Youtube and posted on my blog, to tweets scheduled down to about 20 minutes, but there have been more than a few nights when it’s the last thing I’ve wanted to do. Have said that, it’s also been great fun. I’ve gotten almost comfortable talking to myself, certainly improved my ‘umms per minute’ rate, and have a wonderful record of the year. I’ve also got to vlog from all sorts of interesting places. I toured Italy a couple of times with my band in the summer, so I’ve vlogged from over there. I’ve also been to numerous festivals and concerts and done the same from there, so it’s been fun. With regards to author/fan communication, I wouldn’t put it near the top of the list. I’ve had a few nice chats with the videos as a springboard, but not nearly as many as via emails and twitter.

Q.  One Goodreads reviewer described Thirteen Roses as “The Walking Dead as if written by Neal Gaiman.  Is that a fair

assessment and if so, why?

A.   I wish!! I loved that quote. It was the kind of quote you couldn’t pay to get, and that it was entirely not my doing was even better! Neil Gaiman’s Sandman is still one of my favorite comic series of all time, so I was beyond flattered to have that comparison made. I’d like to think I could get somewhere close to him in terms of characterization if nothing else, but I’d have to leave that up to the reader to decide…

Q.  There are a number of zombie apocalypse books which feature a science based beginning, i.e. an experiment gone wrong,  (which coincidentally is how my zombie apocalypse began), terrorists who discharge a virus, or some other physical phenomena.  I understand your zombie series has more paranormal origins.  I don’t mean to ask for spoilers, but can you elaborate a bit for my 3.5 readers?

A.   Without wanting to cop out, it’s very difficult to divulge much of the paranormal side of things without giving everything away. Having said that, I’m happy to say that the origin of the zombies is fairly standard. Am ambitious and slightly naive science student spends far too much time messing with an airborne-delivered toxin. The government takes it away from him, only to have some religious nuts discover the answer to their very screwed up prayers and get involved. The paranormal element comes in with the people left behind, the sorry survivors such as yourself. There’s more to it than that, but I really don’t want to spoil all the fun.

Q.  I might know a guy who’s also losing the battle for his hair.  Note that it’s not me at all, just some other unnamed person.  Any advice on follicle stimulation that I could pass along to this individual or should he just give up the goose?

A.  Alas, I’ve tried all sorts. I can confirm that having kids, moving house, and eating your own body weight in chocolate don’t help with hair growth, despite all my wife’s assurances that they would. Actually, she might not have said the thing about the chocolate…

Q.  Michael, thanks for taking a few minutes to speak with me today.  Before I go, do you have any final words of wisdom that might help my friends and I survive the East Randomtown Zombie Apocalypse?

Food! Head to the nearest library and get yourself some books on farming. Simple, self-sustaining farming is a must with all that supermarket fruit and veg already rotting away. Similarly, find some goats and put a fence around them. Chickens, too, if you can find them.

However, considering the people you surround yourself with, I’d have thought finding a space ship and getting the hell off this Godforsaken rock would be the only true way to survive.

Best of luck and lovely to talk to you.

BQB EDITORIAL NOTE: Thanks, Michael!  I’m going to check with Alien Jones on that, but he’ll probably bore me with some lecture about Intergalactic Space Law, which I usually just take as code for him being too lazy. Good luck with your challenge!