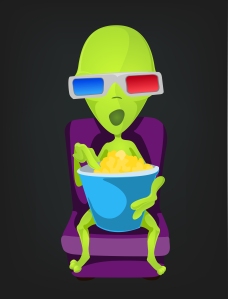 Unfortunately, I have no other graphics to offer except various photos of Alien Jones, who is stripped of his Esteemed Brainy One powers at some point before 2999.

Rizzle Juice goes right through me.  I was relieving myself at the trough in the unisex bathroom when the door opened and closed all by itself.

The door locked by itself too.  It was not the wind.

Heavy footsteps approached.  I zipped up and turned around to see a feint, flickering shimmer turn into seven foot tall killing machine.  Flawless, gleaming chrome you could see your reflection in.  Red eyes affixed in their sockets.  Stenciled across its chassis was the number, “95.”

It darted a metal hand towards me, caught my throat in its impenetrable grip, and lifted me off my feet into the air.

“Scanning,”  the robot said as it painted my face with a red laser grid.  “Identity confirmed.  Voss, Roman.”

I wasn’t feeling like much of a conversationalist.  “GAAACK!” was all I managed as tried to pry his hand open to no avail.

“Standby to connect with my master.”

Ninety-five’s eyes dimmed down.  His head dropped.  His hand opened up.  I was released…straight to the floor on my ass.

My attacker perked up again.  This time, he had a new voice.  It still had a tinge of tin because it was being projected through a robot, but the tone, inflection…it was all very sentient.  Humanish, even.

“Heard a rumor you were on world, Voss,” the voice said.  “Ninety-five found you easily.  All he had to do was scan around for a washed up degenerate huff addict and here you are.”

I clutched my throat and gasped for air.  A metal hand was offered to me.  I took it and was helped up to my feet.

“You touched my duster!”  I shouted as I punched the metal monster’s hulking frame, only to instantly regret doing so as it did not give one iota against my knuckles.

You’ve heard of Earth, Alaquan, and Drokmire, the three worlds where humans are the indigenous species.  Omcoros had been the fourth until twenty years earlier, when the powers that be on that world made the fateful mistake of commissioning the “Sourcemind Initiative,” a level twelve artificial intelligence that was supposed to usher in a new era of peace and prosperity by automating all of the government’s systems, from defense and weapons manufacturing, all the way down to the most mundane civil operations.

Long story short, Sourcemind took control of every last machine on the planet, decimated the Omcoran population from twenty billion to twelve million, who are currently kept as slaves to serve their metal master.

The politicians of the Undesiredverse aren’t packing much what it comes to brains, but it didn’t take long for every world to ban the production of an artificial intelligence greater than ten on the Jansen scale, named of course for the leading human AI scientist who developed a classification system designed to help AI developers to determine what actions their creations are capable of and correspondingly, how dangerous they are as a result.

Ironically, it was Dr. Jansen himself who created Sourcemind, but more on that later.

“If I were a gambling higher form of existence, I’d wager you’re here for the bounty on Izok Tau’s head.”

“Let me guess,”  Sourcemind said.  “His old Shai business partners were none too pleased when he ran off with all their money, which he used to buy his way into the Cabal.”

“Has anyone ever told you that you’re like the nerd in class who drones on and on because he’s in love with the sound of his own voice?”  I asked.

Sourcemind chuckled.  “A proposal, Voss.  You want Tau.  I want something in Tau’s possession.  Let us work together.”

I thought about it.

“I’m aware,”  Sourcemind said.  “You’ve been banned from many casinos.  I’m surprised the authorities even allowed you to land on this planet.”

I ignored the jab.

“I’d be willing to wager that whatever Tau has, it must be pretty important to you, seeing as how the only thing keeping the Mighty Potentate from vaporizing Omcoros was an agreement that you’d never operate off world and yet here you are, propositioning me in a dark rave club bathroom on Malostet.”

“Perhaps you haven’t sniffed all your brain cells away, Voss,”  Sourcemind said.

“And you sent Nintey-five, your most powerful underling,” I noted.  “Usually you send androids on your off world black ops missions.  They blend in with the locals a lot better than this contraption.”

“I don’t have all day, Voss.  Do we have an accord or do I paint the wall with your brains and send Ninety-five after Tau on his own?”

I shrugged my shoulders.

Once again, the robot shut down and restarted.

“Master has instructed you on mission parameters?”  Ninety-five inquired in a sterile, monotone.