I’m Doing it My Way, Sort Of – The Alleged Man

And now, the end is near;
And so I face the final curtain.
My friend, I’ll say it clear,
I’ll state my case, of which I’m certain.

I’ve lived a life that’s full.
I’ve traveled each and every highway;
And more, much more than this,
I did it my way. 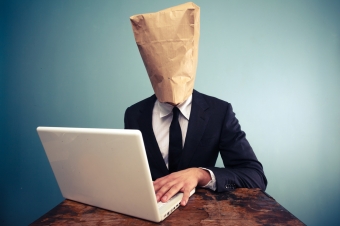 The Alleged Man here, but not really. Pay no attention to that man behind the curtain.

There’s a nasty rumor that Bookshelf Q. Battler and all the characters on this blog are just one guy pretending to be a lot of people, but that’s just balderdash if you ask me.

Oh wait, you can’t ask me, because I’m not really here. But for a brief moment, pretend that I am.

Bookshelf Q. Battler and I began as one in the same. It was the handle I went by because I wasn’t ready to say hello in person.

Old BQB and I have a lot in common.  We watch and review the same movies. He comments on the same pop cultural stuff I’m interested in. We are both big time nerds.

But at some point, BQB outgrew me.  Maybe it was when he befriended Alien Jones. Or when he roundhouse kicked the Yeti in the face. Or when he became the caretaker of a magic bookshelf. Or when he died on the toilet after shooting lightning out of his butt and came back to life to go on an adventure. Or when he enlisted the help of a 1950s noir detective. Or when his hometown was overrun by a zombie apocalypse.

Whenever or however it happened, though we still share some unique inner traits, BQB’s life is just way more exciting than mine now.

It’s long been said that Kermit the Frog was Jim Henson’s alter ego. Henson was the smartest guy in the room but lacked the big ego one would need to go around telling everyone. He had a quiet air of confidence about him. He knew exactly what to do and when to do it but didn’t outwardly demand everyone’s respect, rather, they just gave it to him.

Kind of reminds you how the Muppest are always getting into trouble only to run to good old reliable Kermit to bail them out, doesn’t it?

Am I comparing myself to a great like Henson? No. But BQB and I are both nerds who wanted to be writers, did something else instead, and now we’re both trying to become writers again thanks to modern self publishing technology that’s made it possible.

Either way, we both have our own personal “Sword of Damocles” to face and somehow, we often find ourselves watching TV and eating cookies when we should be writing.

But after being all over the place, I always come back to my BQB way of thinking…

It was nice to step outside of the curtain for a moment to talk to you for a minute today, 3.5 readers.  I have to return to the shadows now.

You see, I know what it is like to struggle, to be down and out, to give life a hundred and ten percent and only get ten percent back.

Through all sorts of cosmic tomfoolery, I ended up in a tough place and after years of hard work, crawled myself out of it. Where I am now is pretty good.

It’s not great. I wouldn’t consider anything great until I’m a big time successful writer.

But still, it’s good. And as anyone who has struggled will tell you, when you lift yourself up, the struggle doesn’t end.  You just keep your head on a swivel, wondering what you can do next to make sure you never have to go back to the struggle.

You become a self struggler.

So BQB will have to stand in my place and collect the 3.5 readers’ applause.

It’s ok. BQB has earned it.

He did save East Randomtown from a zombie apocalypse, after all.

Page Frank, because it’s time to do it…BQB’s way.