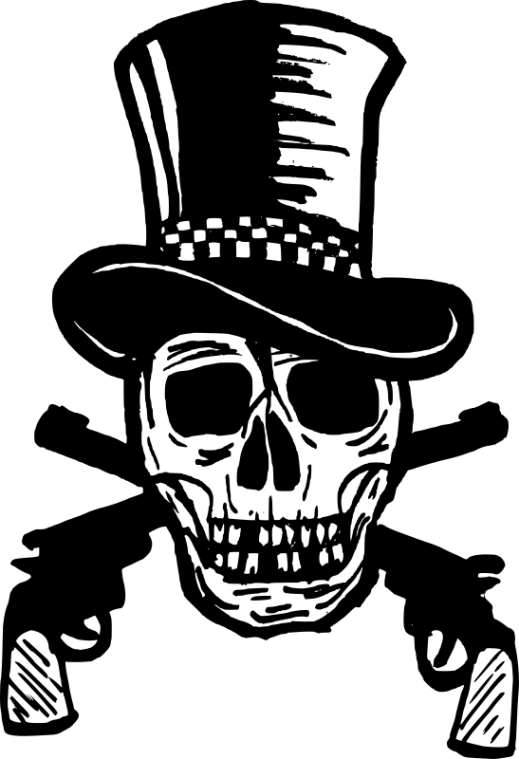 “Ha,” Bowie said. “You couldn’t hit a tap-dancing elephant if it were right in front of you. Let’s call it a draw and…”

Marvin Blanchard fired. His shot was true. Bowie dropped to his knees and clutched his stomach. Blood oozed out of the wound, staining his white shirt red.

Bowie aimed at Wright, but before he could pull the trigger, the knifeman fell face first into the sand.

Wright clocked the old man in the face with the butt of his pistol. Blood smeared teeth popped out of the doctor’s mouth as he fell.

The old man struggled to stand up only to have his throat stomped on by Wright’s boot heel.

“I never did care for you, Maddox,” Wright said as he put his weight down on his heel to crush the old man’s wind pipe. “Don’t you know that standing up for a lost cause is a good way to get yourself killed?”

Bowie was up. Blood poured out of his stomach. He was soaked in it. He drew his knife and staggered towards the sheriff.

Chester fired a shot that landed in Bowie’s left shoulder. Unfazed, Bowie hurled his blade with great accuracy through the air. It landed in Chester’s heart, killing the younger Blanchard brother instantly.

Bowie fought through the pain and lunged at Wright, tackling him to the ground.

The sheriff and the knifeman traded blows. Bowie managed to straddle Wright and was about to bring his fist down on his opponent’s face when Marvin smashed the butt of his gun down on the back of Bowie’s head.

To Marvin’s surprise, Bowie did not fall. As if he were some kind of immortal monster, Bowie stood up.

Bowie threw a fist at Marvin. Marvin ducked, but cut a wide slash across Bowie’s abdomen.
Bowie staggered over to Chester’s carcass and pulled his knife out of the dead man’s chest.

Bowie looked Marvin in the eyes. “You think…”

Blood sputtered out of Bowie’s mouth. “…it makes you a big man…to do that shit heel’s dirty work?”

“A job’s a job,” Marvin replied as he pushed the rapier deeper into Bowie’s guts.

Bowie gritted his teeth. His face turned red. There was a look of shock and amazement in Marvin’s eyes as Bowie plunged his knife into Marvin’s chest.

“Some jobs aren’t worth doing,” Bowie said as he pulled his knife out of Marvin’s chest. “If the man in charge isn’t worth shit.”

Marvin’s body fell to the ground, cutting Bowie further as the rapier that had pierced his stomach became dislodged.

Wright stabbed Bowie in the back with a pocket knife.

Bowie turned around as if he’d just been tickled. He glared at Wright.

“I told you not to miss,” Bowie said.

“Why won’t you die?” Wright asked.

In one swift motion, Bowie slashed his blade across Wright’s throat. It opened up nicely, coating Bowie’s face with a misty blood spray.

Wright grabbed at his neck in vain, then fell to the ground.

Bowie dropped to his knees, right beside his latest victim’s body.

“Because you’d like that too much,” Bowie said as he raised his knife high into the air. With both hands on the handle, Bowie used all of his strength to bring the blade down into Wright’s chest, ending his opponent once and for all.

Too many wounds. Too much blood lost. Bowie passed out and collapsed into the sand.

BQB here again with another movie trailer, this time for Wonder Woman.

It’s got fine ass Amazonian warrior babes which is what I want to see in a Wonder Woman movie, and also at BQB Headquarters at all times.

It looks like effort has been made to produce a story line, which is an improvement over that Batman vs. Superman garbage we were given earlier this year.

I am slightly concerned that maybe they’re just bogarting the Captain America movie – i.e. they’re both superheroes that fought in a war a long time ago and then end up in modern times.

B vs S sucked. I did not think that Suicide Squad sucked though the critics did.

I’ll keep my fingers crossed that Wonder Woman will leave me and the critical world happy.

The LEGO movie really took everyone by surprise.

They’re back now with LEGO Batman.

The trailer looks great.  It’s Batman for kids, but it looks like they’ll get into some of Batman’s issues and make fun of him.

The part that made me laugh was Commissioner Gordon (Barbara Gordon this time around) proposes to work with Batman.

Batman doesn’t like that, assumedly because he prefers to be an outlaw.