How the West Was Zombed – Chapter 19 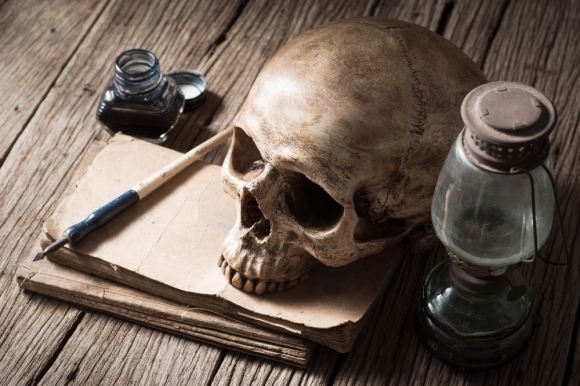 Back at the church, Slade walked in on a gentleman’s game of pinochle.  No money was at stake. It was just a means of passing the time.

“One of you suckers is cheating,” Knox declared.

“You say that every time,” Gunther replied.

Joe smirked and studied his hand.

The younger Knoxes weren’t playing.  They were more interested in the magnificent hawk Miles was sketching with a pencil on a piece of paper he scrounged up.

“Looks so real,” George said. “Who taught you how to do that?”

Slade took a load off.  Gunther slid the blueberry muffin tin across the table.

“A gift from Miss Bonnie.  I had to rescue them out of the dirt after she discarded them upon the sight of you canoodling with your new paramour.”

Only one muffin left.  Slade, a frequent customer of Anderson’s General Store, was fully aware that Mrs. Anderson sold wins with exactly three muffins inside.  No more. No less.

Slade stared his number two down.

Funny how good news tends to arrive way too late.

Knox’s blue stained teeth indicated to Slade he’d found the second culprit.  In admiration of Joe’s apparent refusal to screw his boss out of a snack, Slade pushed the tin over to him.

Slade pushed the tin again.  Closer.  Then he nodded.

“Well, if you insist.” Joe helped himself.

“Washington finally got around to acknowledging our existence.”

TO: All FEDERAL OFFICERS

Lade there the telegram down. “Bullshit.”

Lade looked to Joe, who appeared surprised that someone wanted his opinion. He’d never worked for someone who asked for it before.

“I suppose if I were back East and expected trouble out West, I’d want my men to stick around and slow the trouble down,” Joe said. “A less scrupulous man might lie to get them to do it.”

The Oscars are too pretty.  Who is your favorite ugly or actress that you’d like to see nominated?

How the West Was Zombed – Chapter 18

After lunch, Slade and Sarah took a constitutional along the banks of the Mississippi River, which flowed just outside Highwater, hence the town’s name.

They arrived just in time to catch “The Belle of the Ball,” a massive red and white steamboat, make its way down river. Happy passengers toured the deck, men in suits, ladies in full length dresses carrying parasols.

“I would love to take a journey on one of those one day,” Sarah said.

Most quick witted men would have seen that statement as an “in” to slip in an offer to take Sarah on a boat ride. Slade, on the other hand, just grunted.

Sarah took Slade’s arm and rested her head on her shoulder. “At the risk of sounding like a ninny I must say I’ve enjoyed the past few days with you, Rain.”

“I love your quiet confidence,” Sarah said. “Jebediah, oh how awful for me to speak ill of the dead, but he was different…”

Slade just kept watching the steamboat go by, its enormous paddle wheel turning around and around.

“…all he ever wanted to do was talk about his feelings, his worries, his burdens. I did my best as is the place of any good wife but it became so tiresome for me.”

Slade wasn’t sure he liked what he was hearing.

“Men really should be the rock that women lean on, shouldn’t they?” Sarah asked. “All that emotion, so unmanly, don’t you think?”

Slade didn’t mean that “uh huh.” He found himself missing Miss Bonnie more than ever. Deep within his heart, a battle began, between his love for the only woman he was able to drop the macho man act around, and the woman who wanted that macho man. Miss Bonnie took him as he actually was, Sarah was enchanted by the brave face he put on.

But Sarah was there and as the old saying goes, a bird in the hand…

“What are your intentions?” Sarah asked.

“Rain I know we’ve only just met but time passes by so quickly,” Sarah said. “My child birthing years will soon be behind me, and it is rather unseemly for us to be seen carrying on around town without…”

Slade raised a quizzical brow. Sarah took her arm back.

Sarah looked around to check if there was anyone listening in. Seeing no one, she whispered, “I’ve seen you shirtless!”

“All these things should mean something,” she continued. “I wouldn’t do them with just any man.”

Slade got down on one knee, took Sarah’s hand into his and what came next wasn’t exactly the most theilling proposal ever made, but it got the job done.

Overcome with joy, she wrapped herself around Slade, smothering him with kisses, an act she quickly recoiled from.

“We shouldn’t be kissing outside of marriage,” she said. Then after a pause, she pressed her lips against Slade’s for more. “Lord, forgive me just this once.”

They found a rock and sat down. They kissed awhile longer then Sarah began laying out all her plans for the future. The wedding, the children, everything.

“We’ll need a ring to make this official,” she said.

“I got one,” Slade replied, thinking about the ring he once intended for Miss Bonnie. Now it was just gathering dust in his desk drawer back at the Marshal’s office.

Slade ran his off the cuff decision through his head. Was he an idiot? Had he just ruined any chance of ever being with Miss Bonnie or was he smart to shore up a sure thing rather than hold out for a long shot? He did feel affection toward Sarah, but he wasn’t sure if it was love or just appreciation for a woman making it clear she loved him.

The Marshal’s concentration was shot by the blaring of a train whistle. From his vantage point, he could see a locomotive chugging in over the Sturtevant Bridge, pulling a long line of cars behind it.

Emblazoned on the side of each car in bold black letters was one word. “LEGION.”

The door of one of the cars rolled open. Three men cracked open one barrel after another, dumping a steady stream of red liquid straight into the Mississippi.

Sarah was too busy dreaming to pay attention. She missed the whole spectacle.

“If it’s a boy, I’ve always been partial to ‘William.’ What do you think?”

The train headed to Highwater Station. Sarah carried on for awhile longer until Slade interrupted.

“You need to leave your spread for awhile,” he said. “It’s not safe.”

“Something’s going on,” Slade explained. “I’m not sure what but I’ve got a bad feeling.”

“You’re a man,” Sarah said. “You…desire…what all men desire but we aren’t married yet, Mr. Slade. Unmarried men and women living together under the same roof would be an abomination in the Lord’s eyes.”

Sarah put a finger up against Slade’s lips. “Shhh. I won’t have it. Not another word. Our special day will arrive soon enough and we will get together between the bedsheet and…”

Slade felt the situation called for more words than he usually spared. “I’m not talking about that at all. Something sinister is in the works and…wait. Bedsheet?”

“Marriage is until death but there is an interpretation of the good book that indicates that…this is so embarrassing.”

Now Slade wanted to know more than ever.

“That my sinful parts still belong to Jebediah, but the Lord will always approve of a married couple engaging in sexual congress for the purpose of procreation…”

There was a momentary lapse in Slade’s cool demeanor. “Will you spit it out already?!”

Sarah bit her upper lip. “Hence, a hole in a bedsheet.”

Slade felt the bottom fall out of his stomach. A little voice in his head told him to back out of the proposal. Did he really want to limit himself to sex through a hole in a bedsheet for the rest of his life?

But then again, another voice in his head reminded him that sex through a hole in a bedsheet, bland as it sounded, would still be a lot more interesting than the zero activity happening in his boudoir at present.

He went with that voice.

Sarah’s head was back on Slade’s shoulder. “Such a wonderful man.”

Call it a failure to prioritize, but Slade became so focused on the bedsheet issue to insist any further that Sarah stay in town.

He sucked it up. Maybe in a few years he’d be able to talk her down to a hole in a pillowcase.

Once again, they slap a pair of glasses on a beautiful person instead of giving a nerd role to a genuine nerd.

For shame, Hollywood!  For shame!