Top Ten Warning Signs Your Boyfriend Might Be a Nihilist

Is your boyfriend sullen?  A bit depressing?  He never looks on the bright side?  Maybe he’s more than just a pathetic little goth twerp.  Maybe he’s a full blown Nietzsche worshipping nihilist.

From BQB HQ in Fabulous East Randomtown, it’s the Top Ten Warning Signs Might Be a Nihilist:

#10 – He Doesn’t Believe in Paying the Check

He could be holding fast to a belief, or he could just be a cheap fucker.  Oh well, it’s 2017. Women can pick up checks now.

#9 – He Doesn’t Believe in Deodorant

Could be a nihilist.  Could just be smelly.

Which is surprising as Nietzsche more than likely gave many an 1800s German lady a free mustache ride with that big ass lip room.

No laundry.  No dishes.  Maybe it’s his instinct to say no to the world he sees as a big nothing, but then again, he could just be a man.  I mean, that’s women’s work.  Am I right, fellas?

#6 – He Doesn’t Believe in Believing

And if he doesn’t believe in belief then do his beliefs fold in over themselves and collapse into nothing?

#5 – He Doesn’t Believe in Anniversaries

Or that could just be an excuse to explain why he always forgets them.

Then again…let he who hasn’t embraced his inner ubermensch cast the first stone.

Which is cool because prospective employers don’t believe in him either.

#2 – He Doesn’t Believe in Relationships

So why are you still with him?

#1 – He Always Sees the Glass as Half Empty

It makes sense.  Someone had to drink half the milk.  Was it you?  For shame.  You’ve destroyed your nihilist boyfriend’s faith in the world, or what little he had.  Then again, if he had any, he wasn’t a nihilist to begin with, so there you go.  There’s that.

It is I, Dr. Hugo Von Science!  Perhaps you recognize me from my many wunderbar inventions:

And last but certainly not least:

Anyhow, I’d like to say a few words about my former student, Mr. Bookshelf Q. Battler, who took every class I taught at the Advanced Science Institute.

In fact, BQB’s assistance was instrumental in securing a patent for the Incredible Exploding Chinchilla.  We were able to secure all legal rights to the invention, thus stopping those lesser bastards at Science Tech from their foolish plan to develop exploding ferrets.

BQB is a wise man, an intelligent man, and a generous man.  In fact, he spotted me a portrait of Andrew Jackson just to say all this.  That’s just the kind of guy he is.

But what you really need to know is that his epic story, Bookshelf Q. Battler and the Meaning of Life is coming to your computer screens on May 15.  It’s going to be a blog serial, meaning every day throughout the summer, he’ll post a bite size chunk of his adventure tale right here on bookshelfbattle.com

The best part?  He’s doing it for free!  (Which makes sense because between you and me I suggested to him that he should spot you all a portrait of Andrew Jackson if he wants anyone to read it).

Whatever you do, be sure to read the part where I, the illustrious Dr. Hugo Von Science make a brief cameo in this stinkenheimer of a story.

By the way, I also hear mumblings that BQB has yet another series dropping on this blog on June 1.  I have no involvement in that one because he’s thus far only been referring to it as “Project X.”

Finally, I just want to point out that BQB’s strongest subject has never been math.  He claims as some kind of a joke that he only has 3.5 readers but he just told me his blog has around 900 followers.

Such a poor math student.  That reminds me – due to poor calculations, BQB’s first one hundred chinchilla test subjects did not even explode.  It was only when I pointed out to him that he forgot to carry the one was he able to explode chinchillas at a fast and furious pace.

Either way, if you haven’t followed the Bookshelf Battle Blog, now’s the time to do so because you’ll be able to take in free serialized stories on this blog all summer long.

And who knows?  I might return to talk more about scientific happenings of a scientific nature.

Where Are My Readers From? (Views by Country)

My readers – they stoke the fires of the Bookshelf Battle Blog Machine, fueling the furnace of this humble blogger and inspiring me to be steadfast in delivering the latest news about books, movies, aliens, yes, and of course, my magic bookshelf.

Where are you all from?  Let’s take a look-see:

#1 – USA – Coming in first place – The Americans!  From sea to shining sea, the Yanks are dominating the Bookshelf Battle scene with a whopping 6,262 views.  That’s almost as many times as I caught The Yeti using his Commodore 64 to checkout those Kim Kardashian photos.

#2 – United Kingdom – God Save The Queen!  The Brits come in second place, but at a mere 682.  Was it something we said, Brits?  Are you guys still feeling some sour grapes over that whole revolution thing?  Hell, if it’s any consolation we pay more taxes now than King Edward ever levied on us.  Hoisted on our own petard if you ask me.  Tax the crap out of our tea for all I care.  This blogger’s drink of choice is Diet Shasta Orange anyway.

Please don’t tax my Diet Shasta Orange.  I don’t want to throw all my orange soda into the harbor.  The fish will get gassy.

#3 – Canada – Oh Canada, our home and native land, true patriot love and something something something!  (Look, just be impressed that I knew that much.  We’re still trying to convince 75% percent of the population down here that you guys actually exist and aren’t just a bunch of magical wood sprites living in a fabled frozen land.)

The Canucks have viewed my site 335 times.  Frankly, I blame myself.  I need to do more to capture the Canadian market.  That’s why I’m diligently working on the following reviews of prominent Canadian Films:

#4 – Australia – G’day Mates – The Aussies have viewed this site 249 times.  I was impressed until I realized they were all from this guy: 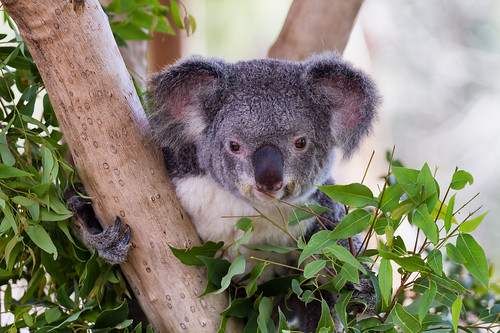 He’s been e-mailing non-stop, begging me to review his self-published book, Eucalyptus Leaves Are Delicious!

It comes as no surprise that my four top countries for views are English speaking lands.  I welcome all viewers, but obviously, I’m limited in that I only speak English, Klingon, and Dothraki.

(New Zealand, I was a little disappointed with you guys – 81 views?  Seriously?  What, you guys are too busy watching all those Hobbit movies get filmed?  Get on the ball, NZ.

Of course, I welcome viewers from all across the globe.  Therefore, I’m working with Google Translate to reach out to viewers in Non-English speaking countries.

For example, the Germans viewed my site 101 times (20 more times than you, New Zealand, not that I’m trying to make you feel guilty or anything.

So allow me to translate some commonly used Bookshelf Battle speak for the Germans’ enjoyment.

ENGLISH:  Stupid Yeti!  Get in the basement!  You know you are only allowed to come upstairs on Thursday nights to watch Scandal!  Away with you!

Wow.  That gave me chills.  Thanks Google Translate.  And let that be a lesson to you, Herr Yeti.

What about France?  Our French friends visited this site 49 times this year alone.

I adore the croissants too, Frenchies.  I really do.

Finally, the Japanese have viewed this site 17 times this year alone.

ENGLISH: The series finale of Dexter was awful! I can’t believe the protagonist became a lumberjack!

Oh wait.  Before that I should have issued a:

Sorry about that, Japanese folk.

Thank you citizens of the world for taking in the greatness that is the Bookshelf Battle Blog, brought to you by Blogger-in-Chief Bookshelf Q. Battler.

Also, please allow me to apologize in advance if those translations were incorrect.  In no way did I intend to insult a) your honor b) your beliefs c) your culture or d) your lovely, lovely mothers.

As they say in Portuguese, the official language of Brazil, where my blog was viewed 141 times (still way more than you, New Zealand, just saying):

ENGLISH:  Join us tomorrow on Bookshelf Battle, where nothing can stop the one post a day challenge!