Interesting story on FOX news today – there’s an all Asian-American rock band calling themselves “The Slants.”  They attempted to trademark their name but were denied by the government on a claim that the term was offensive, racially insensitive etc.

They took their case to the Supreme Court and won.  SCOTUS struck down “the disparagement clause” which keeps offensive terms from being trademarked.

I’m a free speech purist, so I side with “The Slants” on this.  In theory, it may sound great to give the government the power to censor “offensive speech” but offense is in the eye of the offended and once you give the government an inch of power they’ll take a mile of it. Today they’re censoring inappropriate rock band names, tomorrow they will censor political speech as offensive – i.e. “I think Candidate X is wrong on such and such issue” might be deemed offensive and you’d be tossed in the hoosegow for voicing your political beliefs.

Thus, when it comes to free speech purism, you have to rely on the “marketplace of ideas” to sort things out.  “The Slants” may have come up with a clever marketing gimmick to get themselves some play in the short term.  Hell, even I’m not really a fan of using the term “slant” – maybe I’ll have to start calling them “That Asian-American Rock Band” or something.  At any rate, if they want any long lasting staying power, they will have to churn out some super catchy tunes or else the people will vote with their ears.

That’s how this all works, people.  That dude on the street corner wearing a sandwich board that reads “Hitler is My BFF” and ringing a bell gets to do that under the law and that’s the price we all pay to be able to speak our own minds.

Don’t worry about that hypothetical guy with the sandwich board.  The free marketplace of ideas will be regulate him.  He won’t be invited to any fancy dinner parties or getting any positions of power anytime soon.  Let the people decide what speech gets you where, but don’t let the government start picking and choosing who gets to say what.  In the short term, it may spare your ears from having to hear things you don’t want to hear but in the long run, it will eventually lead to you not being able to say what you want to say.

Sidenote – I’d be curious if “NWA” ever had any trademark issues or did they solve the issue by just calling themselves “NWA” and leaving it to the public to figure out what that stood for?  (FYI millenials, I’m not telling you what it stands for.) 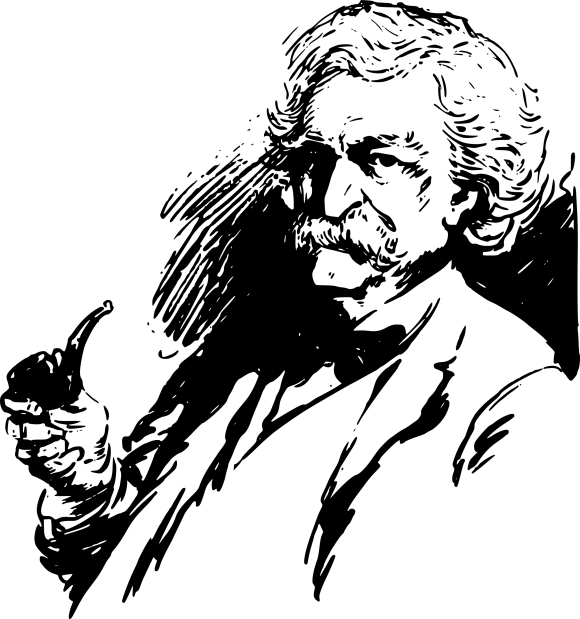 The Mississippi Rive will always have its own way; no engineering skill can persuade it to do otherwise.  Zombies are equally stubborn and foolhardy.  Only a ball peen hammer applied liberally to their rotting craniums can persuade them to do anything else but eat your brain.

In the beginning of a change the patriot is a scarce man, and brave, and hated and scorned.  When his cause succeeds, the timid join him, for then it costs nothing to be a patriot.  In like fashion, few men are made of the stern stuff necessary to attack a marauding zombie head on.  Instead, they cower in corners, concerned only with their personal safety.  Once a man of great bravery steps up and murders all impending zombies in the vicinity, then, and only then, will a sniveling reprobate remove himself from his corner of cowardice and boldly declare, “I supported zombie killing this entire time!”

None of us can have as many virtues as the fountain-pen, or half its cussedness; but we can try.  A fountain-pen can help a man translate his thoughts onto the page and also, it works well when plunged into the brain of a zombie.

Zeal and sincerity can carry a new religion further than any other missionary except fire and sword.  Fire and swords are also good weapons against filthy zombies.  I’ve always found that if a zombie won’t burn, it’s best to chop its vile head off with a sword.  Don’t forget to plunge the sword in the beast’s brain for good measure.

I have never let my schooling about zombie anatomy interfere with my education of zombie slaying tactics.

Total abstinence is so excellent a thing that it cannot be carried to too great an extent.  In my passion for it I even carry it so far as to totally abstain from total abstinence itself.  Hell, sometimes the only way a man can come down off a high after spending a night’s worth of vigorous zombie fighting is to get all up in some Mississippi boo-tay.

What ought to be done to the man who invented the celebrating of anniversaries? Mere killing would be too light. It is doubtful that would even be effective as most likely this man would revert to the undead state of a wretched zombie.  Anniversaries are very well up to a certain point, while one’s babies are in the process of growing up: they are joy-flags that make gay the road and prove progress; and one looks down the fluttering rank with pride. Then presently one notices that the flagstaffs are in process of a mysterious change of some sort–change of shape. Yes, they are turning into milestones. They are marking something lost now, not gained. From that time on it were best to suppress taking notice of anniversaries, especially the anniversary of the first time you ever witnessed a close friend getting his brains devoured by a zombie.  No one needs to remember that shit.

To ask a doctor or builder or sculptor for his autograph would be in no way rude. To ask one of those for a specimen of his work, however, is quite another thing, and the request might be justifiably refused. It would never be fair to ask a doctor for one of his corpses to remember him by, seeing as how that corpse is likely to turn into a zombie, leaving you with no choice but to make an utter shambles of the doctor’s office when you bash the zombies brains in using little more than the closest blunt objects in your general vicinity.

I don’t like this thing of being stripped naked & washed. I like to be stripped & warmed at the stove–that is real bully–but I do despise this washing business. I believe it to be a gratuitous & unnecessary piece of meanness. I never see them wash the cat.  However, I wash myself anyway, for many medical doctors in good standing with the board of medicine have assured me that regular baths are the only way to rid one’s self of the various germs that can infect a man with a zombifying virus.  Wash your bum or become an abomination, as my old spinster aunt used to say, and she wasn’t kidding.

There’s nobody for me to attack in this matter even with soft and gentle ridicule–and I shouldn’t ever think of using a grown up weapon in this kind of a nursery. Above all, I couldn’t venture to attack the clergymen whom you mention, for I have their habits and live in the same glass house which they are occupying. I am always reading immoral books on the sly, and then selfishly trying to prevent other people from having the same wicked good time.  In summation, good readers, I can only assume that my most revered book, The Adventures of Huckleberry Finn, has been banned from your local lending library as it contains a wealth of information vis a vis anti-zombie warfare.  Also, it features use of the “N” word like 9,454 times.

Among human beings jealousy ranks distinctly as a weakness; a trademark of small minds; a property of all small minds, yet a property which even the smallest is ashamed of; and when accused of its possession will lyingly deny it and resent the accusation as an insult.  Jealousy can even be found among dirty disgusting zombies.  Why, I have seen many a zombie pick a fight with an associate zombie over the size of a pilfered brain,

Cole focused all of his attention on getting the chainsaw started. He yanked furiously on the starter cord. Occasionally, this would give the saw a little jolt. It was brand new, but it was wet, so it would sputter for a bit then shut down again.

“Come on!” Cole shouted as he yanked the starter cord. “Start, damn you!”

Cole looked up to see a missile shoot out of Felix’s Javelin, up into the school and then ever so gracefully, it locked onto the toilet gator, following the beast as it moved through the water until….KABOOM! There was an all consuming fireball, followed by a twenty foot wall of water that rose up into the air before quickly dissipating.

Felix gave a “thumbs up” sign to Cole. Cole looked around, searching for any signs of gator life.

“Did you get him?” Cole asked.

One by one, members of the gang poked their heads over the side of the roof. Walter had never stopped filming and caught superb footage of the explosion.

Cole looked at Sharon. “Do you see him?”

Sharon struggled to look through the rain at the flooded street below. “I don’t see anything.”

Rusty threw up his hands and cried, “Woo! Victory baby! Time to go home and crack open some frosty brews!”

Cole grabbed the paddle and moved the canoe a few feet towards where the explosion had occurred moments earlier.

“You think so?” Sharon shouted out.

“That was just way too…easy.”

“You’re over thinking it, bro!” Rusty hollered. “That sucker’s dead, ya hear? Deader than the night life in Amish country, he’s deader than Elvis!”

“Forget about it!” Rusty yelled. “Let’s go kick back and as soon as this storm is over we’ll find his carcass and use it to make some belts, some shoes, maybe some alligator handbags for the ladies.”

“I could go for an alligator handbag,” Maude said.

“No thanks,” Sharon said. “I only do designer.”

Cole sat in the canoe in silence for another minute or so. “Huh,” he said as he picked up the paddle. “Maybe he really is…

Skippy erupted out of the water and grabbed the side of the canoe with his sharp claws. He snapped his jaws up and down in Cole’s direction, wanting nothing more than to get the great hunter between his teeth, down his throat and into his belt.

Cole thought fast and jammed the oar vertically between Skippy’s jaws, preventing the monster from closing its mouth. This slowed Skippy down, though Cole quickly noticed that the oar was beginning to crack and bend under the pressure.

“Come on, God!” Cole shouted at the sky. “If you ever cared about me, please! Make this thing start!”

He pulled the cord again. Rung-nah-nah-nah….

SNAP! The oar broke in two. Skippy spit the pieces out and lunged forward. The canoe was starting to go down. Cole could feel water spilling into his shoes, water that was entering the canoe as Skippy pressed down on it with his formidable bulk.

The chainsaw motor was humming now. The chain turned at a rapid pace, and not a second too soon, for Cole barely prevented himself from becoming gator chow by ramming the blade right into Skippy’s mouth. Sparks flew off of Skippy’s teeth as they connected with the blade.

Up top, the gang watched in horror as their beloved hero staved off the creature.

“You got another missile, Felix?” Rusty asked.