So, out of morbid curiosity, I watched the first twenty minutes of Fuller House.

At the twenty minute mark, I couldn’t take it anymore but here are my thoughts.

The whole extended family has gathered at the Tanner house in San Francisco for one last get together before Danny, Becky and Uncle Jesse move to LA as they all have conveniently obtained new jobs there at the same exact time.

Thus, the “Full House” is about to become empty.  DJ (Candace Cameron) returns with her boys.  Her husband, Mr. Fuller (conveniently named to give the show a catchy title) has croaked.  Kind of like how her mom croaked.  Shit the Tanner family has no luck.

John Stamos, Dave Coulier and Lori Laughlin, all old as shit now, look exactly the same as they did from the original show, thus leaving me to wonder if deals with Satan were struck.

The Olsen twins passed on the show and there’s a joke about that.  The show is self-deprecating so there is an admission to the audience that hey, they aren’t out to craft amazing television here.

Stephanie (Jodi Sweetin) has enormous sweater cannons and its not my fault for noticing as they’re put out on display.  Well, not “out, out” but still.

Kimmy Gibbler, formerly the goofball neighbor kid/DJ’s friend who came over to bug the Tanners constantly, is separated from her husband and has a daughter of her own.

I didn’t watch long enough but it was basically building up to DJ, Kimmy and Stephanie taking over the Full House to raise DJ’s kids and Kimmy’s daughter together.

Ugh.  I don’t know.  I’m sure this show brings a lot of joy to people who really loved the show.

My recollection from when I was a kid was that its main fan base was geriatric old ladies, all of whom are six feet under now.

Maybe I’m just a glass half empty kind of a guy but all this show does is make me feel old.  It seemed like the show was just on yesterday.  Now the adults are geezers.  The kids are the adults with kids of their own and all kinds of adult problems.

I mean, isn’t there a part of you that just wanted to remember that show with everyone being young and happy?

Because time marches on at a fast and furious pace and eventually life wrecks every plan you had.  Maybe we were all better off thinking that the Full House family all rode off into the sunset and were very happy.

Because that’s life.  For a little while, you’re a kid.  You believe in the world because it has never given a reason not to.  Then you try to make something of yourself and boom, here comes the shit.  That person you loved double crosses you.  Shit.  That degree you got is worthless because no one will hire you.  Shit.  That job you don’t like you’re going to be stuck in it forever because the economy is garbage.  Shit shit shit.

Maybe, just maybe we’d like to think that the shit Danny, Jesse and Joey suffered through didn’t revisit the next generation but low and behold, everyone’s life turns to shit I guess.

By the way, the show isn’t really about peoples’ lives being shitty.  Everyone on the show seems genuinely pleasant.  Perhaps I’m just projecting my own shitty life on it.

We talk about self-publishing a lot on this blog and I think what Hollywood is doing with all these old show reboots is relatable.  Fuller House probably would not have been picked up by a major network, but Netflix was happy to have it to bring in the subscribers.

A lot of old shows are coming back thanks to the Internet creating new homes for them.  So maybe the lesson is maybe somewhere on the Internet, there’s a home for your writing as well.

House of Cards – How to Talk Like Frank Underwood

“I want some cereal.”

TRANSLATION: As they say in Gaffney, “breakfast is the most important meal of the day.”  And as the President of the United States, my days are more important than those of the average man.  But which cereal, pray tell, should I feast upon as a prelude to this glorious morn?

Captain Crunch?  Hardly seems worth the time of a man of my stature.  Why would a sea captain be so interested in cereal anyway?  It boggles the mind.

Lucky Charms?  Bland oats and sugary marshmallows.  My teeth hurt just thinking about it and really, is there such a thing as luck?  I’ve gotten where I am through sheer will and determination.  Dumb luck had nothing to do with it.

Fruity Pebbles?  As delightful as it would be to watch my milk turn various colors I must resist as this Flintstones themed product harkens my mind back to prehistoric times – the days when a man was allowed to be a man.  If he wanted food, he killed it.  If he wanted something, he took it.  And if he wanted a woman, he took her.

Oh how I would have been a god had I lived amongst early man.  It’s best to not remind myself about what I missed out on.

Perhaps I’ll just have some Kashi Go Lean. Mix in some fruit.  Full of fiber. Good for the bowels.  Cleanses them of their deepest, darkest secrets, the things you don’t want anyone else to know about, the things everyone has done but ironically, no one would ever forgive you for.

Also, it helps you poop.

House of Cards Season 4 is here.

You might remember, Frank Underwood stopped by this time last year to offer a book review of Green Eggs and Ham.

Bookshelf Battlers, I’m pleased to announce that Frank Underwood, Fictional President of the United States in the House of Cards world, has agreed to be a guest book reviewer today.  I interviewed him earlier this week to get his thoughts on the timeless children’s classic, Green Eggs and Ham, by the incomparable Dr. Seus.  Here is the transcript of that interview:

FRANK UNDERWOOD (LOOKS DIRECTLY INTO THE CAMERA):  As they say in my hometown of Gaffney, 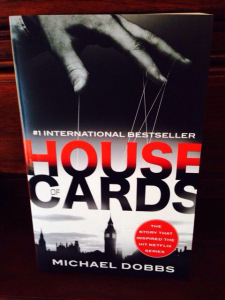 Planning to read and review the House of Cards novel by Michael Dobbs soon. Until then, enjoy Frank’s review of Green Eggs and Ham.

South Carolina, if you’re going to do something, do it big.  So why on earth would I ever allow myself to be featured on a book blog that only has 3.5 people reading it?

BOOKSHELF Q. BATTLER:  Mr.  President, thank you for agreeing to this interview.