Behold, 3.5 readers, the book cover for Zom Fu in all of its brain yanking glory.

Now I just need to finish writing the book. 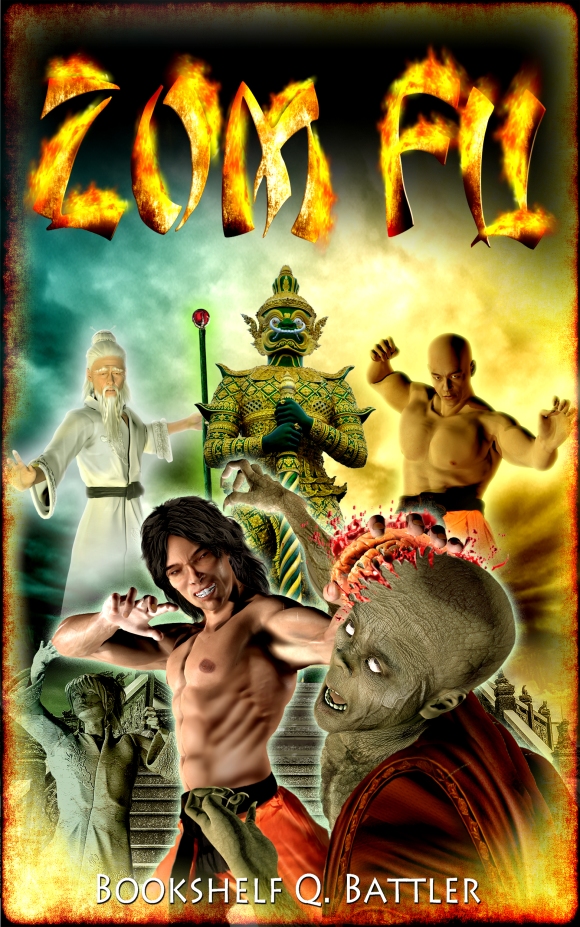 If you were alive in the 1990s, chances are you, at least one time in your life, turned on your TV to watch Tim Allen grunt like a gorilla as he played with power tools.

Home Improvement was born out of Allen’s stand-up schtick in which he poked fun at men who begin playing with power tools only to feel surges of testosterone that cause them to regress into primates.  The schtick evolved into a show in which Tim would work on his home improvement television show by day then be a father at night.

I’m very late to the Last Man Standing party, mainly because I believe that by and large, the sitcom formula, though not technically dead, is certainly on life support.  Cheesy jokes, holding back on swears, formulaic plots, cookie cutter characters – all out the window ever since cable TV started producing their own television shows.

However, I noticed it was on Netflix the other day and feeling nostalgic for my youth in which Tim “the Tool Man” Taylor was one of celebrity father figures my TV offered me, I checked out and yeah, I have to admit, as cheesy as it is, it offered me an occasional laugh or two.

By day, Mike sells crossbows, knives, and hunting equipment, complaining about how unmanly men have got all the while.  By night, he reconciles his macho tendencies with the fact that he is outnumbered in his own home by his wife (Nancy Travis) and three daughters with no one but his infant grandson Boyd to turn to.  At times, he finds allies in the form of his hard ass boss Ed (Hector Elizondo) and his daughter’s boyfriend Kyle.

Gorilla grunts have been traded in for complaints about millennial hipsterism.  Baxter is sort of a less offensive Archie Bunker-esque character, unabashedly unapologetic with his conservative views yet twist his arm enough and he might try to see everything from the millennial hipster’s point of view.

An episode in the first season sums up the character.  When his company’s baseball team is forced to go co-ed (let females play), Mike is torn between his belief that men should be allowed to have their own time when they can grunt, snort, burp, drink beer and tell dirty jokes without worrying about offending women.

On the other hand, as a father of three girls, he dislikes the idea that someone might tell his daughters they can’t do something.  Ultimately, he recruits his most tomboyish daughter for a spot on the team and she crushes all the dudes.

Mike, who rants regularly on in videos on his store’s website, sums up a feeling that a lot of men think but few are willing to say out loud, “I want a world where women can do everything a man can do…and just don’t want to.”

Tim Taylor has grown up and morphed into Mike and Mike, like many of us modern men, suffer from an identity crisis.  Women have no idea what they want us to be anymore and we’re just as equally clueless.

But one thing’s for sure – we men need crossbows, and beer, and hunting equipment, and on occasion, the ability to burp and drink beer and tell obscene jokes without being judged by the women folk.

We’re just too evolved now to tell the womenfolk that they can’t join in on the outdoor crossbow hunting trips, but they’d better start burping and drinking beer and telling obscene jokes if they want to keep up.

File under – “Women Have the Right to Act Like Men Now…But Why Would They Want To?”

STATUS: Shelf-worthy.  Available on Netflix. Good show for when you need something not too complicated to watch for twenty minutes before you fall asleep.