Ask the Alien – How Do Aliens Have Sex? 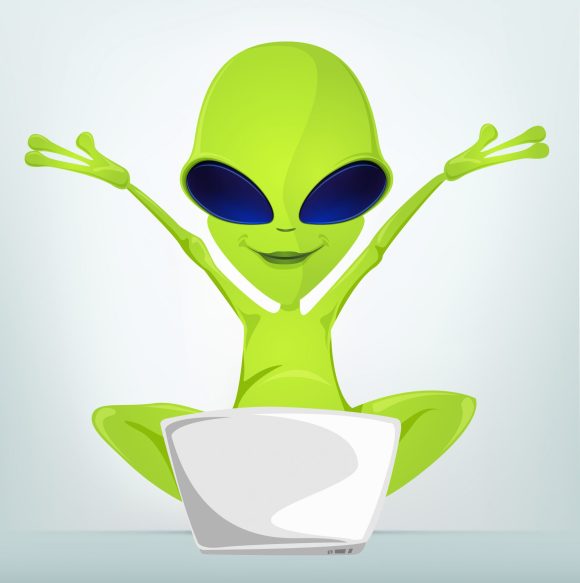 Alien Jones here, only don’t tell anyone I’m here, for I’m deep undercover in the back quarter of Troobalax, posing as a knockoff brassiere purchaser in the hopes of apprehending an intergalactic female undergarment forgery ring.  I must say, of all the wild goose chases the Mighty Potentate has sent me on, this one takes the cake.  I may have finally found a gig that comes with less respect than babysitting Bookshelf Q. Battler in his ridiculously long quest to publish a novel.

By the way, do you know that there are some alien species that have up to five hundred breasts?  That’s a lot of underwire.

How do aliens have sex?  Please explain in painstaking, excruciating detail and provide multiple examples if possible.  I swear I am only asking for scientific purposes and I’m not pumping a bottle of Jergen’s into my hand as we speak.

Lies!  I can see into your bedroom with my high-powered x-ray telescope and you’re reaching for the motion lotion as we speak.  You sir, are not only a pervert but also a liar.

Close your eyes.  You don’t deserve to read this information.  The rest of you 2.5 readers may gladly read on in the name of sexual science.

A loaded question if there ever was one.  First, does my species have sex?  No.  My beings and I are clones who have evolved past the need for sexual organs.  Thus, without the need to constantly find something or someone to hump, we have had plenty of time to pursue a wide variety of subjects, thus making my home planet the most important planet in the universe when it comes to scientific achievement, cultural achievement and so on.

As for other species?  Yes.  Yes they do it.  And how.  A sampling of the most interesting sexual practices I’ve encountered in my many years:

Now if you’ll excuse me, 3.5 readers, these bra criminals aren’t going to bust themselves.  Punny.

Alien Jones is the Bookshelf Battle Blog’s intergalactic correspondent, graciously lending the power of his brain to answer your questions.

Ask the Alien a question and he may very well plug your book or blog in his answer. Ask questions in the comments or tweet them to @bookshelfbattle

Together, we can promote self-published material and ween the masses off reality television, a form of entertainment that Alien Jones’ boss, the maniacal alien despot known as “The Mighty Potentate” despises so much that he’s plotting an invasion of Earth just to stop it.