Top Ten Warning Signs You Might Be Dating Friedrich Nietzsche 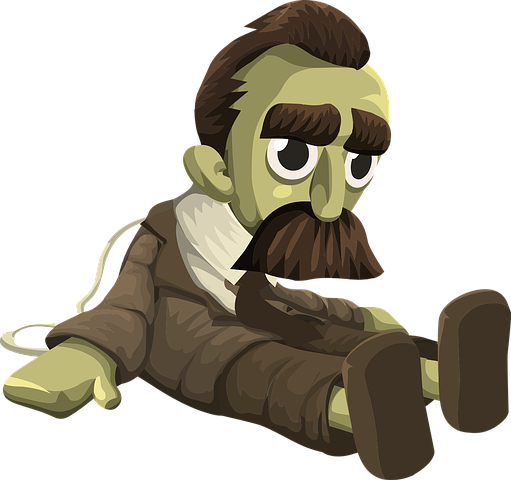 Ahh, Friedrich Nietzsche, the father of all nihilists.

He was a philosopher.  A writer.  And most importantly, an ubermensch.

Nihilists don’t believe in anything, so do you think it is wise to be dating a nihilist when a good relationship requires that both parties believe in it?

Nietzsche died 117 years ago but, you know, he could have faked that shit.  He could be kicking around, trying to date the 3.5 readers of my rarely visited website.

Therefore, from BQB HQ in Fabulous East Randomtown, here are the Top Ten Warning Signs You Might Be Dating Friedrich Nietzsche.

I’m willing to bet that at some point in your life – a parent, a grandparent, a teacher, a boss, an authority figure, a mentor – said this quote to you.  Well, did you know that this quote is typically attributed to the Nietzsche?

In theory, this advice is sound.  If you go through a bad experience and don’t die from it, you have at least learned more about what you can do better to avoid a bad experience like that again.

In reality, if your boyfriend said this about the last sexual tryst you two had together, he is probably Nietzsche.

This is a simplified version of Nietzsche’s writings, but the condensed version is that by not allowing themselves to be bogged down by strict belief in God or religious/moral principles, man can take charge of his life and essentially, can do whatever he wants.  Thus, he becomes an “ubermensch” or “superman.”

If your boyfriend shouts out, “Who’s the man?” doing the horizontal mambo, then he’s just a man.  Any red-blooded heterosexual male worth his salt does that.  I do that with Video Game Rack Fighter all the time.

However, if your boyfriend shouts out, “Who’s the superman?” during the dirty deed, then he is most likely Nietzsche.

Direct quote – “Without music, life would be a mistake.”

Believe it or not, Nietzsche loved music.  He was a total tune junkie.  It was probably tough for him living back then because for most of his life if you wanted to hear music, you had to go listen to someone play an instrument.  Record players weren’t invented until 1877.

And even if you listened to someone play music, it was likely an instrumental piece or a symphony, which, although cool, doesn’t have the panache of, say, Sir-Mix-a-Lot’s “Baby Got Back.”  All those 1800s people loved big butts but they never learned why.  Sad.

Poor Friedrich.  He might have been happier had he been born in the age of the iPod.

It’s ironic, because the man who didn’t believe in anything believed in the ability of a good jam to lift one’s spirits.

So if your boyfriend loves music, he might just be the average, good natured, creative person.  However, if he only likes listening to 1800s German compositions then he’s totally Nietzsche.

Nietzsche was a walking contradiction.  Didn’t believe in anything, yet like any other man, he chased that poon.  Poor guy.  He even struck out regularly.  He was no stranger to romantic heartache, which I assume caused him to offer up this little tidbit:

When you think about it, it’s insane to get into a romantic relationship with another person.  Your freedom is restricted.  You are no longer able to do what you want to do, when you want to do it.  You have to seek this person’s approval on everything.  You aren’t able to speak freely (fellas, if you think I’m wrong, try it with your wife sometime then get back to me.  You’ll owe me a Coke.)
Then again, there is some “reason to this madness.”  In a quality relationship, one that actually works out, you’ll have a person looking out for you, standing up for you, getting your back, and you know, regularly access to sex isn’t anything to sneeze at (though again, that’s assuming that you don’t end up with a cold fish who only begrudgingly tosses you a pity quickie on your birthday.)
If your boyfriend is madly in love with you, then congratulations.  Maybe you really are just that appealing.  Then again, you apparently have enough free time to read this terrible blog article so…yeah, your boyfriend is Nietzsche.
#6 – He doesn’t believe there is only one right way to do something.
Nietzsche famously said:
“You have your way. I have my way. As for the right way, the correct way, and the only way, it does not exist.”
In theory, this sounds like a really great approach to life, a way to compromise and deal effectively with others.  After all, who cares how something gets done as long as it gets done?
Oh wait.  I know who cares.  Your girlfriend.  Men, go tell her that her way of doing something is not the only right way to do something.  Better yet, suggest your way of doing something is equally valid.
Most men experienced in the ways of the female know damn well to never say this to a woman.  If a man doesn’t know not to say this to a woman, then he’s Nietzsche.
#5 – “There are no facts, only interpretations.”
Ladies, if a fight has ever gone down in your house that sounds like this, then I hate to be the bearer of bad news, but you are dating Nietzsche:

GIRLFRIEND:  What the hell?  Do you want to explain why this lipstick is on your collar?  It isn’t mine!
BOYFRIEND:  Maybe that’s lipstick.  Maybe it’s raspberry jam from my morning toast.  Maybe I cut myself shaving and the blood stained my shirt. Who’s to say, really?
GIRLFRIEND:  This is lipstick!  That’s a fact!
BOYFRIEND:  There are no facts, only interpretations.

#4 – “It is not a lack of love, but a lack of friendship that makes unhappy marriages.”
The dude’s got a point there.  Your significant other may be hot as balls and you may be head over heels in love with that person, but often, that just isn’t enough.
You and your plus one must also be good friends.  Do you two get along?  Do you care about one another to avoid starting a fight?  Do you know what makes that person tick, how to make them happy?  Better yet, do you feel a desire to make that person happy?  When that person is happy, are you happy?
If you and your boyfriend are best friends, then he might be Nietzsche, and in this case, that suave, mustache sporting bastard is a keeper.
#3 – He’s his own man.
Don’t try to hold your man down, especially if he says this, which is more evidence that he might be Nietzsche:

“The individual has always had to struggle to keep from being overwhelmed by the tribe.  If you try it, you will be lonely often, and sometimes frightened.  But no price is too high to pay for the privilege of owning yourself.”

Nietzsche may be a mopey sad sack, but he marched to the tune of his own drum and he may be your boyfriend in this case.
#2 – “Whoever fights monsters should see to it that in the process he does not become a monster.”
Did your boyfriend say this before you heard it said in The Dark Knight (2008?)  Congratulations, you’re dating Nietzsche, because this bad ass nihilist didn’t need a man in a bat suit (or his pal turned enemy Harvey Dent/Two-Face) to educate him on morality.
#1 – Free mustache rides!
Damn.  Nietzsche had one hell of a soup strainer on his lip and you know what?  I’m willing to be that all the 19th century German frauleins he met dug it big time.
You see, 3.5 readers, there was a time, right up until the 1980s of my boyhood, when a man’s machismo wasn’t judged by his muscles, or by the kind of car he drives, or his clothes, or his looks, or how fat or skinny he was, or even how good looking he was.
All that past women cared about was how big and bushy a man’s mustache was.  That’s it.  Can you grow a sweet stache?  Yes.  Good for you.  You get the cooter.  Can’t grow a stache?  Can you afford a sweet fake stache?  Good for you.  You also get the cooter.
Past women knew an important fact that today’s female is ignorant of, namely, that good mustaches make for great cunnilingus.  Nietzsche knew that and that’s why he had the biggest, bushiest stache of all time.  Oh how he made the German ladies yodel for strudel with that lip rug.
Tom Selleck.  Chuck Norris.  All the sexiest men of the 1980s had lip hair.  Ask any woman who was in her sexual prime in the 1980s and they’ll tell you the hairy lips are great for tickling hoo-hahs.
Alas, at some point towards the end of the Reagan administration, all the broads took over and they began demanding ridiculous things from us.  They want us to take care of the kids, help around the house, manscape, wax off our back hair, shave off all our facial hair.
Hell, the average woman expects her man to do nothing but stand by the mirror with a Big razor at the ready, prepared to cut a whisker down the second it grows.
If only the women of yesteryear would have educated the women of today.  All men would have big ass lip bushes like Nietzsche and women would have some happy vaginas.
You’re in doubt?  Well, let me ask you this.  Is your cooter happy?  No?  Then madam, you are clearly not dating Nietzsche.