Top Ten Warning Signs Your Girlfriend Might Be a Russian Spy 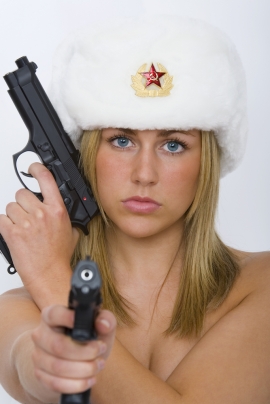 Oh sure, they say they want to be our friends but then as soon as we aren’t looking they kick the Ukraine in the balls and give East Europe a wedgie.

Let’s face it.  For many Russians the Cold War never ended and they’re looking for their chance to spread communism across the globe.

Fellow American men, here are some warning signs that your girlfriend might in fact be a Russian spy:

10.  You asked her if she is a Russian spy and her answer was “nyet.”  Nyet, of course, is Russian for “no.”  This is a clear sign your girlfriend is a Russian spy as an American woman would have responded, “No” or “Shut up and buy me something assface.”

9.  You glanced at her cell phone and noticed she has “Putin” listed in her contacts.

8.  She gets up in the middle of the night, strips naked, opens up the freezer and then just stands there taking in the cold blast.  You could question her about this, but she’ll just give you some bullshit excuse about it being some kind of weird sex fetish.  In actuality, she does this because it reminds her of summertime in her native Siberia.

6.  She has difficulty fitting in during social gatherings.  You and your friends always want to talk about movies, music and popular culture whereas she just keeps randomly blurting out stuff like, “Religion is the opiate of the masses!” and “When we hang the capitalists they will sell us the rope we use!”

5.  Ever since she got a look at your fully stocked bathroom she’s been willing to do horrible, unspeakable things in the boudoir in exchange for a roll of two-ply.  “Pass the Charmin” has taken on an entirely new meaning.

4.  You have compared notes with your male friends.  When their girlfriends get mad at them, they get a lecture or the cold shoulder.  When your girlfriend gets mad at you, she slams her shoe down on the counter and shouts, “We will bury you!”

3.  Whenever you ask her where she wants to go on your next date, she invariably replies, “the Pentagon” then asks if you know whether or not they allow flash photography.

2.  She regularly asks if that is a hammer or a sickle in your pants or are you just happy to see her.