5 Comments
By bookshelfbattle Ask the Alien 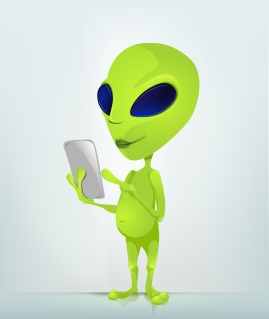 The Esteemed Brainy One plays Candy Crush on his Space Phone

The Esteemed Brainy One here, blogging from Kemphos 91, where an uprising has occurred due to a lack of peanut butter and jelly sandwiches.

Yes, that’s right. You’d be surprised in the vastness of space, that such seemingly trivial things are capable of generating interplanetary conflicts but here we are.

Keep in mind that the Kemphans require a constant supply of peanuts or else they break out into spontaneous song and dance numbers, which sounds like fun, but then they do it for days until finally their heads explode.

I’ve seen it happen. It isn’t pretty. It’s like being front row at a Gallagher performance.

Kemphos 1-90 really needs to fork over some of their peanut reserves to 91 but until then, I have to do my best to keep the peace.

Apologies for not writing more this year, Earth losers, but I just haven’t had the time. Disorder has been breaking out all over the cosmos this year. It’s very unsavory.

In the meantime, please assist me with my mission to launch BQB’s writing career. The sooner BQB is an established writer, the sooner the Mighty Potentate will get off my back.

Did I say get off my back? I meant to say until the Mighty Potenate can be pleased by another one of his genius plans coming to fruition.

All hail the Mighty Potentate.

Here’s where you can find Bookshelf Q. Battler on the inter webs.

PUT BQB IN YOUR GOOGLE PLUS CIRCLES, BECAUSE YES, GOOGLE PLUS IS STILL A THING. I KNOW, RIGHT? WHO KNEW?

AND READ BQB’S STORIES ON WATTPAD – HE IS @bookshelfbattle

Humans, I don’t want to put any pressure on you, but your likes and follows will help keep the Mighty Potentate’s plans to conquer the Earth at bay.

Technically, I’m not allowed to criticize the Mighty Potentate, but let’s just say that he literally solves all political problems by vaporizing his opponents.

Not exactly a boon for democracy, but it does make for fun prime time debate viewing.

Thank you 3.5 Earth losers.  I’ll be back sometime this summer to answer your questions, so keep them coming.

5 thoughts on “Alien Jones Checks In”