I have a Coke addiction, 3.5 readers.

I’ve been chasing that fizzy brown dragon my whole life.

Thus, it cool to see the Coca Cola store in Disney Springs.

Not gonna lie, 3.5 readers. Most of these are going to be about food. 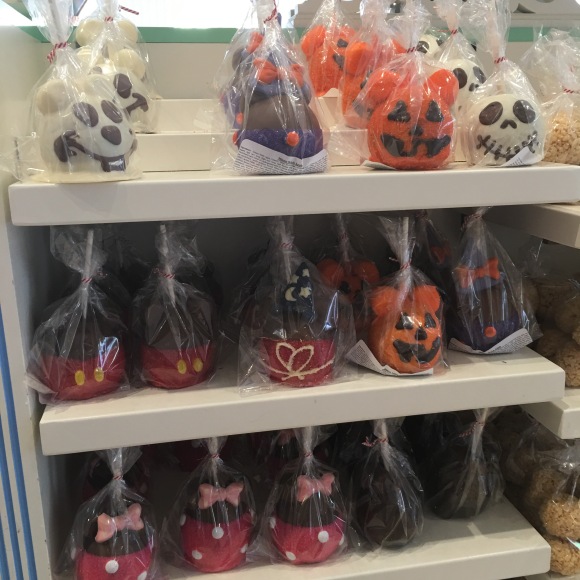 I’m just going to say it.

Donald Duck is the best and Mickey Mouse sucks the big one.

Honestly. Who can be happy all the time?

Look, I’m not saying this is the case but whenever I don’t see that bad ass duck walking around I feel like it’s an anti-duck conspiracy.

Mickey is all about goodness and wholesomeness.

Donald just bitches and loans all the time.

Stick Mickey in the worst situation and he’ll smile.

Put Donald in the happiest of situations and he’ll find something to quack about.

Donald is a working class duck who is helpless to solve all his problems so like the rest of us, he just squawks out in a furious, impotent rage whenever he’s had enough.

And so I worry. Is that where society is headed? Everyone be happy and oust all the contrarians?

And you know, as much as he quacks in fury, Donald is a stand up duck.

Who knows what happened to Huey, Dewey and Louie’s duck parents?

Are they the duck spawn of Donald’s drug addled duck brother or duck sister? Are they deadbeat duck parents?

Who knows? All I know is that when those boys needed a duck father figure, Donald took them in and raised them as his own.

Yes, I’ve put a lot of thought into this and I have decided that Donald rules and Mickey is crying on the inside. 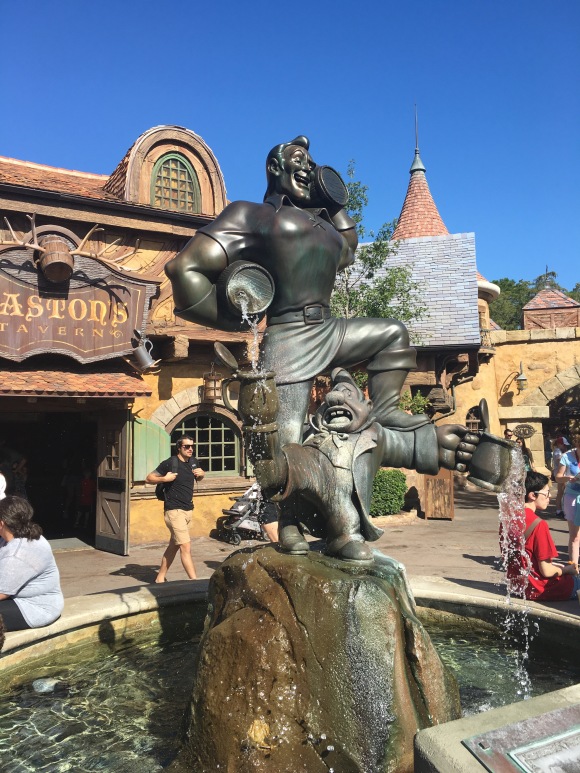 Has there ever been a character more unjustly vilified in Disney lore than Gaston, 3.5 readers?

Overconfident? Yes. Cocky? Sure. Kind of a douche? You bet.

Hell, when you’re a big time winner in a world full of epic losers it’s hard not to be a douche.

But when that douche heard that Belle had been kidnapped by and held hostage by a hideous dog monster, Gaston manned up and went off to rescue her.

And how’d Belle thank him for his trouble?

She gets Stockholm Syndrome, falls in love with her captor and spoiler alert, Gaston gets his French ass thrown off a damn castle.

Anyway, the G-Man lives on at a tavern named for him in the Magic Kingdom.

I’m now in the happiest place on Earth.

No, not the Playboy Mansion. Hef sold that. Remember?

I’m in Disney World, the world’s premiere theme park dedicated to the worship of a cartoon mouse.

I gotta say I’m not really a ride person. I prefer the restaurants at Epcot and Downtown Disney where you can stuff your face hole.

What is your favorite thing to do at Disney World, 3.5?

The Walking Dead – Who did Neegan kill?

If you recall, at the end of the last season, Neegan was about to give one of our intrepid heroes a vigorous baseball bat beating.

One can only assume we’ll find out who got struck out in the new season, though you never know, there might be an unexpected plot twist.

It is unlikely that a female character will buy the farm in such a gruesome way on TV.

It is unlikely a main featured character will croak.

Thus, you can rule a lot of people out.

Keeping in mind they’ll want to maximize the impact by killing off someone the viewers have bonded with yet the show can continue without and I think that comes down to Eugene or Abraham.

I’m going to guess it is Eugene. He’s the underdog. The cowardly geek who did everyone wrong by lying about a cure yet ironically did them good by tricking them to seek safety.

We like to think we’d be awesome like Rick in the face of a zompoc but in reality, many of us would be a Eugene.

If they do go with a main character? Glenn. He’s shown tremendous growth over the series, going from young adult to man, but the show can go on whereas people would freak out if they los Rick, Michonne, or Daryl.

What are your theories?

The Wombat World control room featured row after row of computer units, stacked neatly on steel shelves, all connected to a bank of monitors hanging on a wall in the back of the room.

Craig, a white man with blonde dreadlocks and a grungy beard, toked on a fat spliff as he put his feet up on his workstation and closed his eyes.

Ron, Craig’s straight laced colleague, was all business. His head was shaved bald and he wore a pressed white shirt with a red power tie as he watched the monitors intently.

“I wish you’d be down with your job,” Ron replied.

Ron flashed Craig a look of utter disgust. “Millions of dollars worth of complex machinery and thousands of lives are in our hands. How you can be so blasé about that I’ll never know.”

“You do those people no good when you’re stressed out of your gourd, Ron,” Craig said as he offered his coworker a hit of his ganja.

“No thanks,” Ron said. “Something tells me that Carruthers Brothers Amalgamated Studios wouldn’t take kindly to their ride technicians being baked.”

Craig sat up and started flipping through the camera feeds. “Look. Berserkasphere? Running. Dinosaur Puncher? One hundred percent. Infernacoaster? Fabulous. Shock Rocket? Awesome. Happy Little International Children Experience? Great. I don’t know why the hell anyone rides that shit ride anyway but its firing on all four cylinders. Will you unclench your butt cheeks and hit this shit already?”

Ron rolled his eyes and took the joint. “Oh why the hell not?”

Just as Ron lifted that sweet refer to his lips and was about to take a drag, a fist rapped on the metal security door that led into the room.

Craig put the door’s camera feed up on screen. Though the person at the door appeared to be an average, run of the mill Wombat World Security Guard, it was, in fact, Brother Klaus in Earl’s uniform.

“Shit,” Ron said as he stubbed out Craig’s joint into his trash can.

“Aw come on, man!” Craig protested. “That was my best Bolivian Brain Crush!”

Ron pressed a button on his board, turning on the intercom. “Can I help you?”
“Inspection,” Brother Klaus said in an American accent.

Ron and Craig looked at each other. “Did you know anything about an inspection?” Ron asked.

“Do you think I’d be dumb enough to be sparking up a doob if I knew there was an inspection?” Craig answered.

“I do,” Ron said. “You definitely look that dumb.”

Ron pressed the intercom button once more. “No one told us anything about an inspection.”

Brother Klaus coughed in order to clear his throat. In his mind, he weighed the various phony responses he could give to Ron until he finally settled on, “It wouldn’t be a surprise inspection if anyone had told you about it, now would it?”

Ron hit another button. The door buzzed as Brother Klaus stepped in.

Brother Klaus looked around the room, ignoring the two technicians.

The faux security guard sniffed the air. “Strange odor in the air.”

“An odor,” Brother Klaus said as he sniffed. “A peculiar, pungent smell.”

“I don’t smell anything at all,” Craig replied. “I think your nostrils are lying to you, man.”

Brother Klaus sniffed the air again. “No. I definitely detect the distinct scent of marijuana in this room. I’m sure of it.”

“Shit,” Craig said. “Since when do you guys do detective work? I thought you all just stood around drinking coffee and handing out wombat stickers all day.”

Ron gulped. “Look. It was just one joint. We’ve both been loyal employees for years.”

“Craig, you weapons grade asshole,” Ron said before turning his attention back to the fake guard. “It was all him. He smoked it. All I did was put it out.”

“Boys, boys, boys,” Brother Klaus said as he stepped behind a bank of computers. “This is a very serious offense.”

“Son of a bitch,” Ron said. “We’re going to lose our jobs. Thanks Craig. Thanks a lot.”

“Man,” Craig said. “Do you really need to report this?”

“Yeah,” Ron said. “Surely we could reach an agreement? Perhaps a certain amount of cash falls out of our pockets by accident and then very coincidentally, you forget all about this at the same exact time you pick it up?”

“One of us will suck your dick,” Craig said.

“I did not,” Ron said as he looked at the computer bank the fake guard was standing behind. “Hey, honestly, this isn’t that big a deal right? I mean, what could the punishment for smoking a joint on the job be anyway?”

Brother Klaus stepped out with his silenced pistol drawn. He fired two bullets into Craig’s cranium, killing the hipster pothead instantly. He then pointed his weapon at the last technician standing.

“Whoa,” Ron said as he put his hands up. “OK, you made your point. Wombat World Security isn’t screwing around anymore. But come on…”

Brother Klaus stepped over Ron’s body, took a seat at the dead man’s workstation, and punched away at the keyboard. The security door locked.

Soon, the Heretic’s hooded face appeared on one of the monitors on the wall.

“Herr Heretic,” Brother Klaus said, now in his default German accent. “We are now in control.”

Eric Shelman spent a long time getting his writing career off the ground.

He wrote. He shelved his work. Finally, he saw other writers doing well by utilizing the Internet and boom, he was in business.

Last year, BQB talked to Eric about zombies and the world of self-publishing.

And don’t forget to check out Eric’s Dead Hunger series on Amazon.

No one cares that you went to Bora Bora or Cancun or your Cousin Fred’s farm.  Your vacation was awful and boring. Just admit it.

Vampires do not want to see that shit. That’s why we don’t follow you on Vampbook anymore.